The stock market is overbought and primed to reverse lower… according to one of this year’s most accurate market timing indicators.

The NYSE McClellan Oscillator (NYMO) is a measure of overbought and oversold conditions in the stock market. And its performance has been outstanding this year. We’ve used the NYMO to trigger several profitable short-term trades.

The NYMO warned us stocks were overbought in mid-July and mid-September.

That gave aggressive traders the chance to profit from a couple short trades as the S&P 500 fell more than 60 points within just a few weeks of each trigger.

The NYMO also warned us when stocks were oversold and primed for a rally.

We got “buy” signals in early June and late August.

Each of these signals led to big rallies and profits for traders who jumped onboard.

Just two weeks ago, the NYMO triggered another “buy” signal. And the S&P 500 is up nearly 100 points since then.

There’s no doubt that the NYSE McClellan Oscillator has been one of the best timing indicators of the year. So it pays to follow it. And right now, this indicator says it’s time to sell. Take a look… 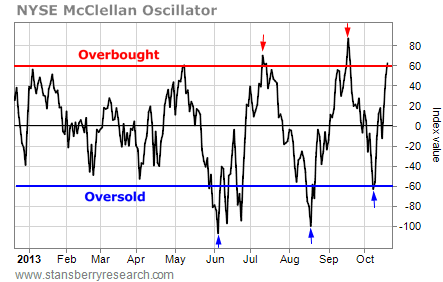 This year, the NYMO has reached oversold levels when it dropped below -60. It was overbought when it rallied above 60. In each of these cases, the stock market reversed almost immediately. Traders who bet on a reversal made fast profits.

Today, with the S&P 500 trading at all-time highs, the NYSE McClellan Oscillator is back in overbought territory. So traders should be on the lookout for a reversal and a chance to profit on a short-term decline in the market.