At times like this, gold and silver typically grab all the attention… and attract all the “safe” money. But there’s another metal that could blast past both of these, virtually overnight.

That’s because it has unique physical properties for which there is just no substitute – something its biggest consumers lose quite a bit of sleep over.

We’re looking at a 70% gain on this one – perhaps more – no matter how far Washington kicks the “debt can” down the road.

At current prices, it could even double…

Even when the government isn’t on the brink of financial suicide, palladium is in heavy – and growing – demand.

It’s found in everything from jewelry to dental equipment, including a wide range of electronics.

They all require palladium.

For perspective, there were 5.4 billion cell phones on the planet in 2009. By the end of this year, estimates are that there will be 8 billion. It’s going to take a lot of palladium for the world to keep talking, texting, and tweeting.

But its most significant use is in the automotive industry, where fully two-thirds, or 67%, of all palladium is consumed each and every year.

By 2018, China alone will likely be manufacturing and buying about 31 million vehicles annually.

But it’s not going to be easy…

What’s crucial to understand about palladium supply is where the metal is actually sourced.

Only about 6.5 million ounces of palladium are produced annually. Recycling, plus sales from a Russian stockpile, supplies the rest, to reach a total 9.8 million ounces each year.
Russia is responsible for fully 44% of the 6.5 million produced ounces and South Africa for 36%. But both of these suppliers face serious output challenges. Norilsk Nickel is responsible for all of Russia’s mined production as a byproduct of nickel production. But Russia’s mined supply has been dwindling, and active mines have seen declining ore grades.

What’s more, only two years ago 775,000 ounces came to market from Russia’s state repository, Gokhran. That was about 8% of world supply. Last year, that number had dropped by 68% to 250,000 ounces. Industry insiders figure those stockpiles may now be totally exhausted, but officially no one can say for sure; Gokhran’s contents are a state secret.

What we do know is that 2012 saw the lowest level of global palladium supply since 2002, suffering a deficit of 1.07 million ounces.

For its part, South African supply is even more challenged. Palladium is produced there as a byproduct of platinum. Numerous South African platinum producers are facing such high costs that they no longer turn a profit. Mines are deeper, power and water are sparse, labor costs are rising, political risks are growing, and work strikes and other stoppages all add up to declining output.

That leaves 14% of mined palladium supply contributed by North America and 6% from a few small players sprinkled across Africa, Australia, China, and the former Yugoslavia.

Industry Insiders Are Hyper Aware of the Supply Squeeze

I recently interviewed a mining executive whose company is a primary palladium producer.

He concurred that the fundamentals for palladium demand – thanks to pressure from pollution control and car sales – are very supportive. He also confirmed that Russian and South African supplies face real headwinds.

After accounting for investment demand, Morgan Stanley is forecasting a 2013 palladium deficit on the order of 1.013 million ounces.

Besides the deteriorating supply and expanding demand factors I’ve outlined, there are two other catalysts that are primed to ignite palladium prices ahead.

“Double Demand” from ETFs and Short-Sellers

The first is physical, or investment, demand. Since 2007 physically backed palladium ETFs have grown to include 11 such investment vehicles, absorbing nearly 2.2 million ounces from global supply, up from 1.9 million at the outset of 2013. Johnson Matthey PLC (LON: JMAT) has indicated that so far this year palladium ETFs have acquired 339,000 ounces of palladium, on pace to surpass 2012’s 385,000 ounces. And this trend is in motion.

Now a 12th palladium ETF is in the offing, which could be trading on South Africa’s Johannesburg Stock Exchange by year’s end. A wildly successful platinum ETF that began trading there earlier this year has already soaked up 685,000 ounces, representing fully 30% of worldwide ETF holdings. The new palladium offering could well be Act II, further exacerbating the market’s persistent shortfall. 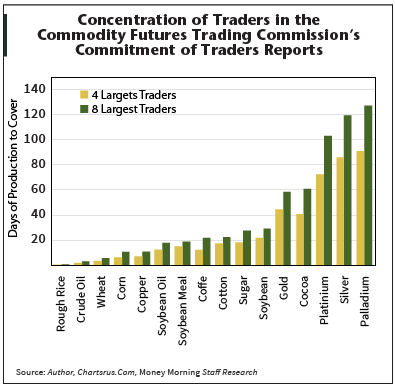 Yet another bullish factor for palladium prices is something intriguing that’s happening in the futures market. As you can see in the chart at right, the eight largest futures traders are short 127 days of world palladium production. That’s at a 13-year high, and it’s more than any precious metal, and more than all other major commodities.

If the palladium price should suddenly rise significantly, those traders would likely be forced to quickly cover their massive short positions.

That could lead to a violent rally in the price of palladium, as they would have to buy long contracts to offset their shorts.

Norilsk, the world’s largest palladium producer, also expects a 1 million ounce deficit this year and has repeated their stance that Gokhran is drained of its palladium stockpile, unable to contribute to the market going forward.

The pricing estimates reflect that shortfall, too.

Palladium is currently trading around $710 per ounce. The average of analysts’ forecasts pegs this year’s price at $751, next year’s at $829, and $909 two years out. The most optimistic of these projections sees palladium averaging $1,200 in 2015.

Extremely bullish supply and demand fundamentals, impending growth in investment demand – and the futures “wild card” all point to palladium prices heading up fast, a lot faster than most analysts expect.