So it’s no stretch of the imagination to suggest that most of these companies can be expected to repeat this annual phenomenon. The announcements can come anywhere from two days to more than two months before the Ex-Dividend Date, so I try to look ahead by about 11 weeks to provide adequate “warning” of the good news to come. Currently, that means companies with Ex-Dividend anniversaries through the end of November. With that in mind, here are the next group of companies that should boost their payouts, based on last year’s dates: 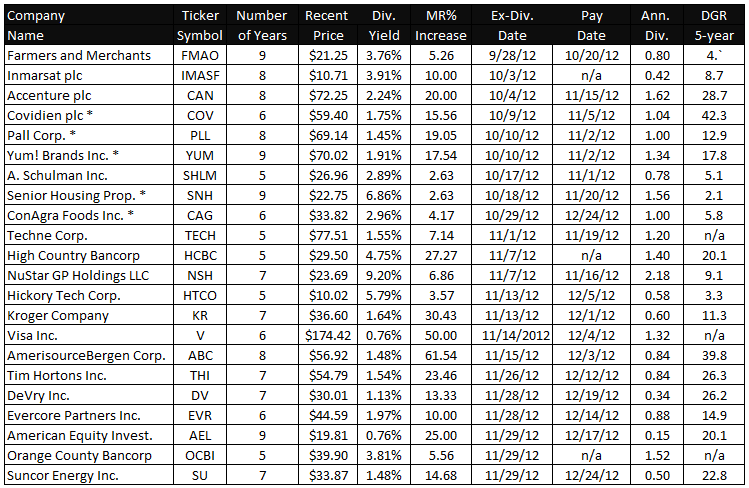 Special Caution
Note the presence of several ADRs (American Depository Receipts) above, including IMASF, ACN, COV, THI, and SU. Some of these may pay a dividend that fluctuates with earnings and may be subject to foreign withholding taxes, in addition to currency exchange rates. That suggests that additional due diligence is warranted when considering such holdings. Typically, the repeatability factor for these dividend increases is about 90%, which I think is worthy of some confidence. The percentage increases (dividend growth rates) may vary, but these companies have established a solid dividend “culture” and generally pass along the fruits of their labor, which means a portion of their growing profitability.