Gold is more hated right now than it’s been in years… and I love it.

We have the perfect setup for a great trade in gold.

Your upside is 70%-plus in the next year. Your downside risk is just 9%. A risk-versus-reward setup just doesn’t get much better than that!

This time around, it could go even higher.

The clearest measure of how hated gold has gotten is what real traders are doing with real money.

And the real money has bailed on gold…

A couple of months ago, the Commitment of Traders report showed that “large speculators” – hedge funds – were more bearish on gold than they have been in years.

Take a look at the chart below. You can see how these large speculators bailed out: 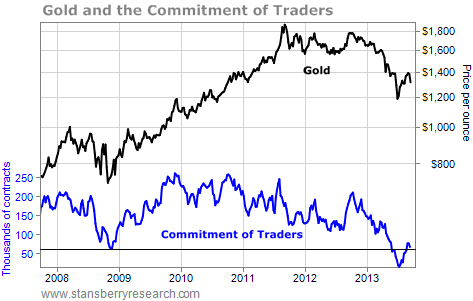 Large speculators became extremely bearish on gold a few months ago… but in late June, the position started to reverse, around the same time gold bottomed.

This is about as good as it gets for placing a trade in gold.

We have incredible upside potential here… Remember, gold soared 71% in 13 months the last time we saw a similar setup. And gold is even more hated today than it was back then.

Here’s what you should consider doing…

I suggest putting on a 12-month trade in gold, right now. Buy today, and sell next September. You could pocket 70% or more. To protect your downside risk, set a stop loss at gold’s June low.

Those are great trading odds.

We have an excellent setup for a low-risk, high-potential-upside trade in gold right now. Don’t miss it.