When I started out in this business in the early 1990s, one man was delivering unbelievable returns to his investors. Take a look:

He was a legend in my office. He was the “double-your-money man.”

Can you name him?

Investors doubled their money with him (in just eight months!) starting in late 1998.

Every four or five years, it seems, this man is able to double investors’ money.

So he’s due for another again soon.

And 2014 looks ripe for him to double your money, as I’ll explain.

He’s Mark Mobius. And these are the returns of his Templeton Emerging Markets Fund (EMF).

Mobius started this fund in 1987 and he still runs it today, 26 years later. In my opinion, nobody in history has spent more time on an airplane searching for investments than Mark Mobius.

First, their growth rates have generally remained well in excess of those for developed markets. Overall, emerging markets should grow about five times faster than developed markets in 2013…

Second, emerging markets often have large and growing foreign exchange reserves, which are far greater than that of developed markets. Moreover, unlike developed markets, many emerging and frontier markets still appear to have ample room for fiscal and monetary stimulus…

Third, the debt level of many emerging markets in relation to their GDP is generally much lower than that of many developed markets.

Also, emerging markets are dirt-cheap, relative to “developed” markets. As I showed you earlier this month, countries like Russia and Brazil are selling at dirt-cheap multiples to book value.

And while U.S. stocks are up 45% in the last two years, emerging markets are flat. Take a look: 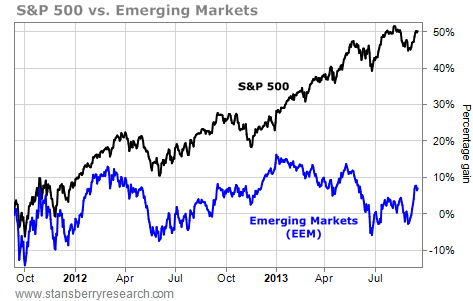 This has created a great value opportunity in stocks in emerging markets, relative to developed markets.

Emerging markets are now cheap, hated, and seem to be just starting an uptrend. I see exactly what I want to see to invest. And so does Mark Mobius…

You ought to consider adding emerging markets to your portfolio today. An easy, tried-and-true way to make that investment is with Mobius in his Templeton Emerging Markets Fund (EMF).

Sponsored Link: While I think just about every emerging-market opportunity could do well over the next few years, there is one I’m especially interested in: For every $1 you risk, you could make $14. Plus… it’s yielding a safe 4.1%. There’s a more detailed description of this idea, which covers the “low-downside/high-upside” nature of this trade, online right now. You can click here to read it. (It’ll take you less than five minutes.)