The bears have been in control of the stock market for the past few weeks.

Lots of folks will argue the selling isn’t over yet, and stocks have further to fall… For the most part, I agree with that thinking.

[ad#Google Adsense 336×280-IA]In the very short term, though, stocks are oversold and ripe for a bounce.

In fact, the decline over the past few weeks looks a lot like the decline we saw in early June.

Back then, stocks hit extreme oversold levels, bounced enough to relieve that condition, and then dropped to a lower low.

We may see something like that happen this time as well.

A couple of technical indicators are pointing that way. 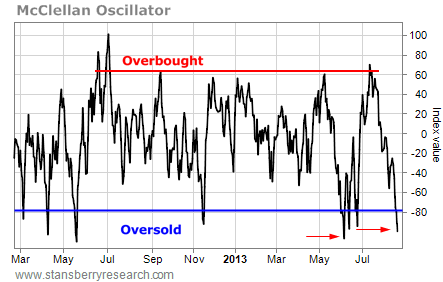 On Monday, the oscillator dropped to its second-most oversold reading of the year.

On the following chart of the S&P 500, you can see how a similar condition in early June led to a quick bounce and then a decline to even lower prices… 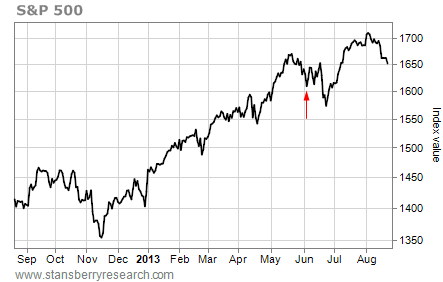 The bounce doesn’t look like much from the chart, but it was good for about 30 S&P 500 points. A similar bounce right now would push the index back up to around the 1,680 level. 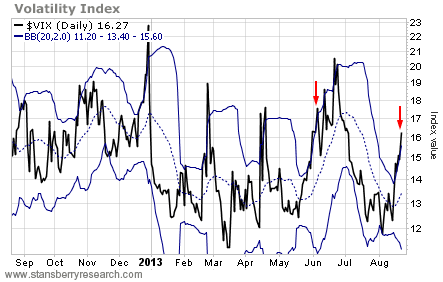 The VIX closed above its upper Bollinger Band on Monday. That’s an extreme move that often leads to a short-term reversal when the VIX closes back inside the bands.

You can see the same condition in early June, when the VIX closed above its upper Bollinger Band and then reversed. That reversal kicked off a bounce in the broad stock market. When the bounce ended, the S&P 500 dropped to a lower low, and the VIX climbed to a higher high.

Right now, traders should be watching for a bounce. Look for the S&P 500 to rally toward the 1,680 level and for the VIX to reverse lower and test its middle Bollinger Band (just like it did in June) around 13.25.

That should be enough to alleviate the current oversold condition and set the market up for a more significant decline.