[Last] Monday, the gold sector did something it hasn’t done since last November:

It traded above its 50-day moving average (DMA) line.

And the rally should have folks looking to buy…

Last month, I explained how the failure of the sector to rally above its 50-DMA – when it was set up almost perfectly to do so – created a firestorm of selling pressure.

I also told you that I believed the disappointing action in the gold sector could be setting up for an even more violent rally in the coming months.

Here’s what I wrote…

This is the type of oversold condition you only see once or twice in a generation. Other than the liquidation event of 2008, we haven’t seen anything similar to today’s conditions since 1976.

Using 1976 as a guide, there’s still room for gold stocks to move slightly lower here. But by that same guide, gold stocks rallied more than 600% in the years following the 1976 bottom. So the sector could explode violently higher once the bottom is in.

Of course, it won’t be a one-way move higher. The sector will have plenty of selloffs and back-and-forth action as it starts its new uptrend. Traders should look at any declines as buying opportunities – especially any declines that come back down and retest the 50-DMA – like the one we got Wednesday… 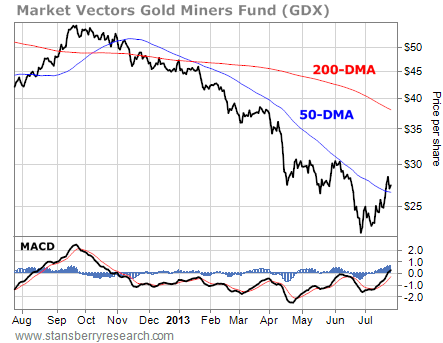 You can see how the Market Vectors Gold Miners Fund (GDX) broke above its 50-DMA (the blue line) on Monday. It extended that rally on Tuesday. Then Wednesday, it came back down and is now testing the 50-DMA as support.

That support should hold. I don’t expect GDX to decline much more than a couple percentage points below its 50-DMA. If that turns out to be the case, [last] Monday’s action will prove to be the start of a new intermediate-term uptrend for the mining sector. And GDX should work higher toward its 200-DMA (the red line) over the next several months.