Things have gone from very good to very bad for U.S. oil refiners.

Refiners take crude oil and turn it into products like gasoline, diesel, and fuel oil. If they can buy oil cheap and sell those products at high prices, they make a lot of money.

[ad#Google Adsense 336×280-IA]But the great conditions that led to great profits for refiners are gone.

And these stocks have more room to fall.

As longtime S&A readers know, new fracking technology has allowed the U.S. to tap into incredible oil reserves in areas like the Eagle Ford, Cline, and Bakken shales.

As I’ve showed you before, U.S. crude production has jumped by millions of barrels a day in just the last few years.

In fact, oil companies have been producing oil faster than pipeline companies could build capacity to move the oil to refineries on the coast. So huge volumes of oil built up at the main market hubs like Cushing, Oklahoma… and pushed the price of WTI down.

In the refining business, where good profits are measured in single dollars per barrel, a double-digit spread was too good to be true… Refiners can’t legally export crude oil from the U.S. So they couldn’t take advantage of this spread directly… But refiners can export refined products like gasoline and diesel fuel.

During that time, refining stocks soared. Giant refiner Valero’s shares rose 200% from September 2010 to March. Shares of Phillips 66 (PSX), the refining arm spun out of oil major refiner ConocoPhillips (COP), rose 150% from May 2012 to March.

But the window is closing…

Below, you’ll find a chart of the “spread” – the price difference – between WTI and Brent. As you can see, it’s reverted to 2010 levels. 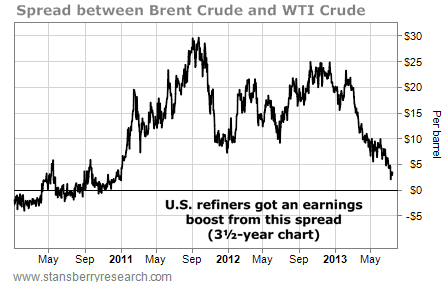 Demand from refiners and a slowly recovering U.S. economy has pushed up domestic oil prices… The flood of cheaper refined goods in the European market and a foundering European economy have pushed the price of Brent down.

Rising WTI prices and falling Brent prices have caused the spread to narrow. And it is already hurting refiners. Both giant refiners Valero and Marathon expect second-quarter earnings to be lower than forecasted.

Some refiners’ shares have taken a hit already. Valero’s stock is down 23% since its March high. Phillips 66 is down 17% over that same period. But these refiners are still well above the levels they traded at back in 2010, the last time the spread was narrow.

Things could get much worse.