Everything that told us to “buy” six weeks ago is screaming at us to “sell” today.

Short-term conditions have gone from bullish to neutral (but still expecting higher prices) and back to bearish in just the past six weeks.

But the market is suffering from multiple personality disorder.

And when the character changes, we have to change our strategy.

This week, the strategy is bearish.

The S&P 500 closed above its upper Bollinger Band last week. 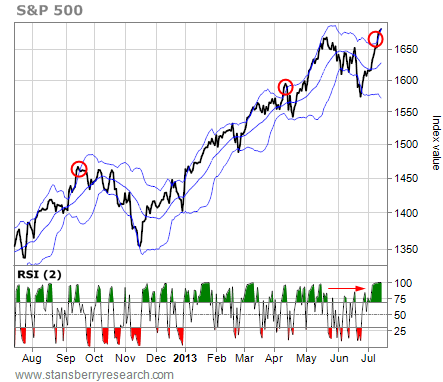 The index closed back inside the bands (blue lines) on Friday. That’s a broad stock market “sell” signal. As you can see from the chart above, that happened two other times over the past year – in September and April. Following each signal, the S&P 500 sold off and dropped toward its lower Bollinger Band.

Right now, the lower Bollinger Band is at about 1,570. So there’s plenty of room for stocks to fall if the bears take control.

Also, notice the two-day relative strength indicator (RSI) at the bottom of the chart. This provides a short-term measure of overbought or oversold conditions. Anything above 70 is considered overbought. (The maximum reading possible is 100.) It closed at 99.87 on Friday.

The McClellan Oscillator is also in overbought territory… 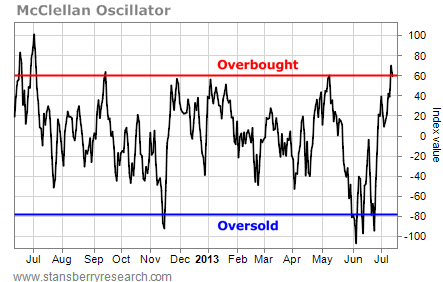 The oversold reading on this indicator helped us turn bullish back in June. Now, it’s telling us to go the other way.

Finally, there’s the American Association of Individual Investors (AAII) Sentiment Index. Last week, this contrary indicator posted the largest percentage of bulls (48.9%) and lowest percentage of bears (18.3%) since May 23. Back then, the S&P 500 peaked at 1,670 and lost 4% over the next two weeks.

The market has enjoyed a healthy rally over the past month. But as I warned two weeks ago, short-term conditions moved quickly from oversold to neutral. Now they’re overbought. So there’s a good chance the gains we’ve seen over the past two weeks could vanish just as fast.