Not all dividend growth streaks are created equal. While we can marvel at companies like Coca-Cola (KO) or Johnson & Johnson (JNJ) raising their dividend for more than 50 consecutive years, most companies can only dream of such an accomplishment.

One thing we know is that dividends can’t grow unless earnings do, since dividends are a payment of a portion of earnings to shareholders.

[ad#Google Adsense 336×280-IA]So when a company goes a long time between dividend hikes, it’s only natural to wonder if earnings are in trouble or some other internal problem has developed that will derail the dividend growth streak.

In compiling the spreadsheet of Dividend Champions, Contenders, and Challengers each month, I see that most of the companies raise their dividend on a dependable, regular basis, usually about the same time each year.

But some companies haven’t established such a clock-like pattern and may cause concern among investors, who naturally wonder if the lack of dividend growth is a sign of trouble.

The main criterion for inclusion in the CCC document is that a company must pay a higher amount each year. That’s a fairly reasonable hurdle that can be met even by companies that don’t raise the payout every fifth quarter. As you can see in the table below, some components last raised their dividend in 2011. They can remain on the list because their total 2012 payments were more than those in 2011, but if they don’t declare an increased dividend soon, then the amount paid in 2013 will represent a “freeze” and they will be deleted. 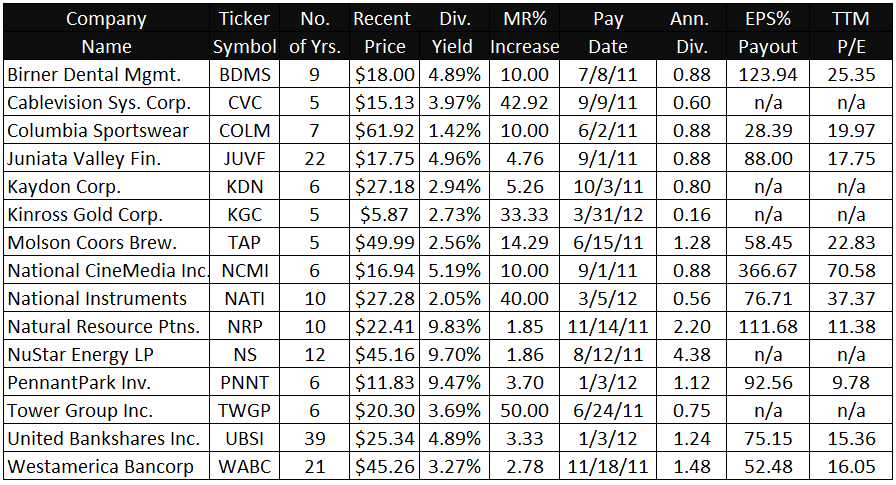 In general, these companies are showing some warning signs that the dividend may be in danger, including high P/Es, payout ratios, and dividend yields. Note that two of the 9%+ yielders are MLPs (Master Limited Partnerships), while the third (PNNT) is a BDC, or Business Development Corp. Such firms may not sport a “normal” P/E or payout ratio because the earnings number may take a back seat to measures of cash flow that factor out high levels of depreciation or other non-cash charges.

Companies with relatively short streaks may be more likely to let those streaks lapse because they haven’t yet established a strong dividend “culture.” Based on recent years’ experience, I would expect a few of these firms to “save” their streaks, but would not want to risk much money on the group in general.