You can make a fortune in commodities buying when an asset has been “blown out” and left for dead.

That “contrarian” take allows you to buy cheap, safe assets.

Looking around these days, you might think coal producers qualify as a contrarian’s commodity. For two years, the sector has been beaten bloody. Major coal producers are approaching their “end of the world” 2009 lows. How much worse can it get?

Now is not the time to buy.

In the early 2000s, the power sector used more than 90% of the coal produced in the country.

But electric power plants are using less coal… much less.

Coal’s problem here is natural gas. As longtime readers know, natural gas is cheap, and we have plenty of it. The latest numbers show U.S. natural gas production is at an all-time high.

It’s not that difficult for power plants to switch from coal to natural gas… In 2005, coal produced almost 50% of the country’s power. Natural gas generated just 18%. In 2012, natural gas fueled a record 30%. Coal’s contribution fell to 37%.

Take the Big Sandy coal power plant in eastern Kentucky, for example. It consumes 2.5 million tons of coal per year. It would cost $1 billion to upgrade this plant to meet EPA regulations… But American Electric Power (AEP) plans to shut it down in 2015.

Collapsing demand is hurting coal prices. The benchmark Big Sandy Appalachian coal price has fallen 18% from its 2011 peak. And according to the Energy Information Administration (EIA), coal prices will remain where they are through 2014. But while coal prices are down and set to stay there, the costs of mining coal are as high as ever.

Peabody and its peers aren’t just suffering a lack of U.S. demand. The global trends are against them, too… China accounts for over half of all the coal consumed in the world. Demand is still growing there, but the growth has slowed. And coal prices in Asia are down 30% from the 2011 peak.

You can see the global trend playing out in the Market Vectors Coal Fund (KOL). Some of its biggest holdings include U.S., Chinese, and Australian coal producers… along with companies like Joy Global, which makes mining equipment, and Westshore Terminals, a coal-shipping hub.

As you can see in the chart below, the big trend in KOL is down… and it just recently struck a new five-year low. 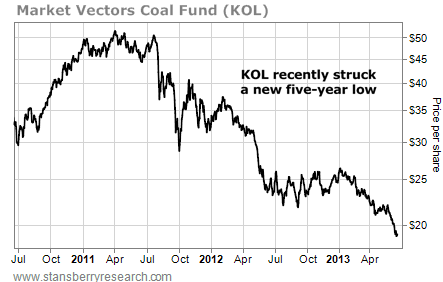 A massive selloff like this might have you hunting in the “bargain bin” for great values. After all, the world is not going to stop burning coal altogether. It still accounts for a third of the U.S. power grid. And a billion Chinese folks still want to watch TV and chill their beer.

Eventually, coal will reach its “blown out and left for dead” bottom. It will offer traders a great setup (like the kind I think we have with uranium).

But right now, the fundamental picture is terrible, and it looks likely to stay that way for a while. The trend here is down… But there still hasn’t been a massive “wash out” selling panic. It’s not yet time to buy coal.