But I still have faith in gold.

That’s why I added more gold exposure to my $100k Portfolio service earlier this month.

I think gold will remain a reliable safe haven for the foreseeable future, which should thus prevent prices from heading below $1,000 an ounce as some analysts are predicting.

I don’t have the same confidence in silver.

Silver is a far more volatile metal than gold. While gold prices rose steadily from late 2008 – at the depths of the U.S. recession – through September 2011, silver prices were all over the map. For the first couple of years, silver rose at an even faster pace than gold, vaulting from roughly $9 an ounce in October 2008 to $49 an ounce in April 2011.

Since then, however, silver has been extremely volatile. Just look at the rollercoaster ride the metal has been on the last two years:

Silver Spot Prices Since May 2011 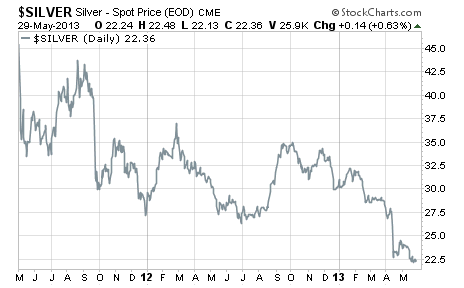 Consequently, while both metals have been on a downward spiral of late, silver has fallen much further on a percentage basis than gold. While gold has fallen 25% in 20 months, silver prices have fallen 47% during that time.

Hence, the SPDR Gold Trust (NYSE: GLD) ETF has a beta of 0.16. The iShares Silver Trust (NYSE: SLV) has a beta of 0.74. Beta is a measure of the volatility, or systematic risk, of a security in comparison to the market as a whole. The higher the beta, the riskier the stock.

True, silver rose faster than gold when both metals were thriving after the recession. But as investors have sold off their metals over the past two years, silver has declined 50% faster than gold.

Simply put, silver is less predictable than gold. Its ups and downs are far more pronounced than gold’s and occur with greater regularity. And its declines are far more damaging. That unpredictability makes silver no longer worth the risk.

With that in mind, I told my $100k Portfolio subscribers this week that I plan to sell out of my two silver positions. I simply don’t have the same confidence in them as I do with my gold position. Because silver prices are so unpredictable, silver miners are no longer reliable.

As indebted countries all over the globe continue to print money, gold will remain a safe haven that functions as a hedge against declining currencies. Silver hasn’t proven to be nearly as dependable.

And while the upside potential may be enticing to some, in my mind that reward isn’t worth the considerable risk.