If a Dividend Champion is defined as a company that has paid higher dividends for at least 25 consecutive years, then a “Double Champion” is one that has done so for at least 50 straight years, a formidable accomplishment when you consider all that has transpired in the past half century.

Consider the implications: Such streaks of dividend increases started by 1964, the year that the Beatles came to America, and in many cases, as far back as the Eisenhower administration…that is, his first administration. The longest streak belongs to ATM maker Diebold (DBD), which started paying (and raising) dividends in 1954.

[ad#Google Adsense 336×280-IA]These streaks were in their infancy during the Vietnam war, Woodstock, and the tumult of the 1960s.

They continued through the vicious bear market, hyperinflation, and the oil embargo of the 1970s and didn’t let up during the 1987 stock market crash, the first Iraq war, or the tragic events of 9-11, let alone the bursting of the “dot-com” bubble or the “Great Recession.”

It might surprise you to know that there are 16 companies that have increased their dividends annually for more than 50 years, but here they are:

Dividends Follow Earnings (and so do Prices)
Note the Estimated 5-year Growth (of Earnings Per Share) in the table above. It’s important to remember that dividend growth and higher stock prices require growing earnings, so continuing streaks of dividend increases, along with stock price appreciation, are an indication that earnings have grown over an extended period of time. Here’s a comparison of how some of the best known names have done against the S&P 500 since the start of 1988: 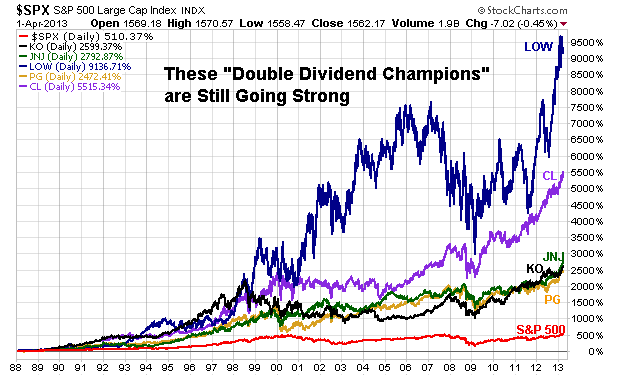 Dividend Star of the Day: American States Water (AWR)
On May 21, the Board of Directors at American States Water approved a 14% increase in the quarterly dividend, from 35.5¢ to 40.5¢ per share, marking the 59th consecutive year of increases. The new rate will be paid on September 3, adjusted for a 2-for-1 stock split to be paid on August 15. After several years of more modest increases, the Board decided last year to start distributing a greater portion of earnings. But note that the payout ratio is just over 57% of earnings (Utilities typically pay out about 70%), so there’s still room for continuing growth.