Since its November bottom, the broad market has gained about 22%. That’s a few years’ worth of gains in a short time. And as my colleague Jeff Clark has pointed out, a lot of stocks are overextended to the upside.

[ad#Google Adsense 336×280-IA]For the past six months, I’ve been writing about the building supply/demand crunch coming in the uranium market.

Uranium is the fuel that powers nuclear reactors.

Physical uranium and uranium stocks were crushed after the 2011 Japanese nuclear disaster.

But over the past year or so, the sector has managed to put in a tradable bottom.

Since uranium stocks are badly oversold and since uranium demand will keep rising, the situation presents the opportunity to make enormous gains.

You can monitor this situation with shares of Cameco (NYSE: CCJ). It’s by far the largest publicly traded uranium producer. It’s the “ExxonMobil of uranium.”

Cameco has a collection of world-class uranium assets… and I still like the looks of its long-term chart. As you can see in the chart below, Cameco was hammered after Japan’s nuclear disaster. But notice that the uranium blue chip has spent the past 18 months “digesting” its huge loss… 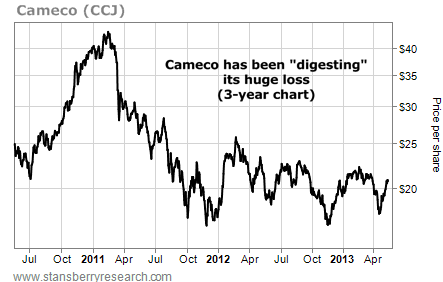 I believe this sideways trading range is a good place to pick up Cameco shares. It represents the worst the sellers could throw at it.

Now, given the bullish uranium picture, the path of least resistance is up for Cameco and the rest of the sector.