Prices that go straight up tend to come straight back down.

It doesn’t matter whether we’re talking about stocks, currencies, or commodities. The more “straight up” they go, the harder they fall.

Parabolic moves happen as buyers chase momentum and rush to get in at any price.

Fear of missing out on the action pushes more buyers into the asset.

[ad#Google Adsense 336×280-IA]Prices increase, pushing even more buyers in… which increases prices even more, and so on, and so on.

Eventually, the market runs out of buyers, the momentum dies, and everyone rushes for the exits at the same time.

We saw it with gold almost two years ago.

And we’re seeing it now with utility stocks. 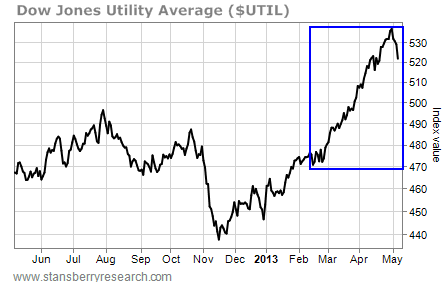 Prior to the drop over the past few days, the utilities index was up nearly 25% since November. It was up 15% in the past eight weeks as the buying accelerated. That’s triple the gain of the S&P 500 since March.

As you can see from the chart above, the price action since March has been almost straight up. There haven’t been any short-term pullbacks to lessen the overbought conditions – nothing to take a little air out of the balloon.

This is the epitome of a parabolic move. And it’s going to end badly, just like the moves in silver and gold ended badly in 2011… 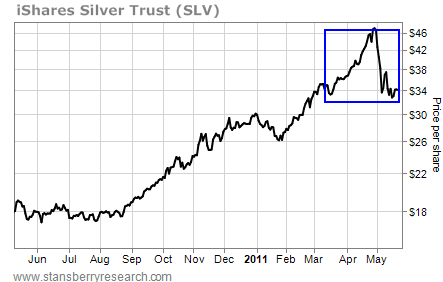 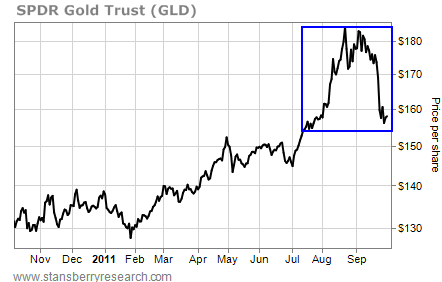 The blue boxes on the charts contain the parabolic moves and subsequent declines. In both cases, the pullbacks completely erased the metals’ gains.

A similar move in utility stocks will knock the sector down 15%.

Right now, the utility sector is only about 3% off its highs. If it gives up its gains since March, things could get rough for utility stocks.