The whole commodity sector just got punched in the gut…

Gold producers got crushed, as you know.

Oil producers are about breakeven.

And pipelines sailed through the trouble. As a group, they’re UP more than 5% in the last three months. 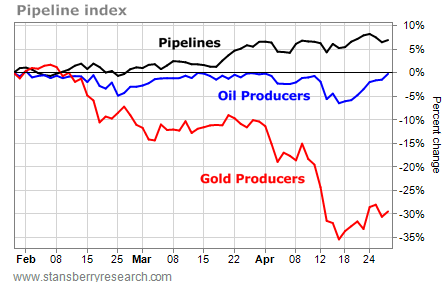 While precious and base metals were getting destroyed, oil only dropped 5%… and natural gas was up more than 30%.

That helped energy producers sidestep the selloff. It also helped the pipelines hold steady… That and a couple other attractive qualities: income and growth.

Pipeline companies own the huge transportation network that moves oil and gas around the country.

Thanks to the shale revolution, we’re tapping huge new supplies of oil and gas. And this pipeline network is seeing huge growth. Since 2008, the industry has seen $50 billion in investment on 11,000 miles of new pipelines. (And those are just the giant main lines. That doesn’t include the web of pipes that gather the oil and gas in the fields.)

All these new pipes are creating a boom in pipeline company revenues. And since many pipelines are structured to pay out income, growing revenues have translated into growing payouts.

As you can see, each of these companies grew dividends by triple digits over the last five years.

As my Stansberry & Associates colleagues have pointed out many times, income is the “fashionable trade” these days. And pipelines’ high yields have attracted loads of new money.

The pipeline index is up 20% since late December, nearly double the broad market’s run. So these stocks aren’t as cheap as they were last year…

(Enterprise value, or EV, takes into account the company’s market value, debt, and cash. EBITDA is earnings before interest, taxes, depreciation, and amortization.)

Once you take growth into account though, these stocks are still near sensible prices. Using forward earnings estimates, here’s how they stack up, from most expensive to least…

According to the Energy Information Administration, almost 2,000 miles of new pipelines that can carry 26 billion cubic feet of natural gas per day will be added by 2017. Kinder Morgan Energy Partners (KMP) and TransCanada already have major new pipelines under construction.

These companies’ shares fluctuate with the oil price. And they’re more volatile than your standard “safe haven” income-payers.

Williams Partners (WPZ), for example, dropped nearly 30% last year. But most of its peers have held up well over the last few years… and they all held up very well during the recent selloff.

They’re protected because they get most of their revenue from “tolls” rather than selling oil or natural gas. And in a zero-percent world, investors are desperate for the kind of income they pay.

After their big run up, pipelines might be due for a breather. But the trends driving them higher are set to be in place for years to come.