How good is “crazy good”? Let me show you…

Since 2000, this strategy has crushed the overall market, beating it by an average of 9% per year.

[ad#Google Adsense 336×280-IA]Best of all, it’s a “dumb” strategy… that requires no special skills to follow… and no expert trading on your part.

You can even buy it as a “one click” fund.

(I’ll tell you what that fund is in a minute.)

You can see the “crazy good” outperformance in this bar chart… 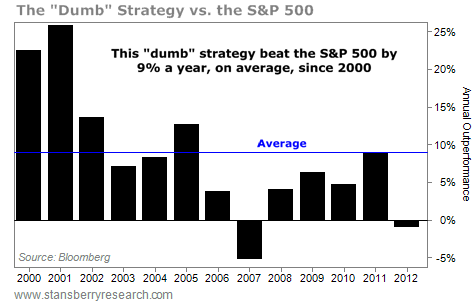 Since 2000, this “dumb” strategy has beaten the stock market by an average of 9% a year – only underperforming the market twice.

And since 1965, the numbers are just as good… Stocks in general have returned 11% a year. But this “dumb” strategy has returned 15.7% since 1965. (These numbers are both from the book What Works On Wall Street.)

Strategies like this one – what I call “dumb” – are my favorite…

I call them “dumb,” but what I really mean is “simple.” I love a strategy that makes sense intuitively… that doesn’t require complicated formulas… and that has worked for decades.

Based on the current numbers, I see no reason why this “crazy good” performance should stop. In short, the stocks in this strategy are still cheap. The top 20 stocks in this fund are selling for an average of 11.6 times forward earnings… and are yielding 1.6%. That’s all good.

The strategy is simple. It’s known as “stock buybacks.” But I like to call them “stealth dividends.”

The principle is simple… Let’s say you own shares of Company ABC… and Company ABC buys back and retires some of its shares… then you end up owning more of Company ABC.

You can think of it like a pizza… If you own two slices of a pizza, and the total number of slices changes from 10 to eight, you now own 5% more of the pizza. You used to own 20% of the pizza, and now you own 25%.

Keep in mind, we didn’t shrink the pizza. And we didn’t remove pieces of the pie. It is just now cut with eight slices instead of 10. Lucky you.

I call this added 5% of the pie a “stealth dividend.” You own an extra 5% of the pie – but you didn’t pay extra for it. And you might not have even noticed it happening.

If you’d received that as a 5% dividend, you would have noticed… and the government would certainly have taxed you for it. So share buybacks are like “stealth” dividends. You get them… but you don’t see them… and the government doesn’t tax you on them.

Meanwhile, they make you money!

The simplest way to trade the buyback strategy is through the PowerShares Buyback Achievers Fund (NYSE: PKW), a recommendation in my True Wealth newsletter. It holds companies that have bought back at least 5% of their shares over the previous 12 months – names like biotech company Amgen, tech giant Oracle, and one of my favorite insurance companies, Loews.

My True Wealth subscribers are already up 35% on this idea. But there is more to come… As I showed you, the strategy this fund follows almost always beats the market.

In short, owning a handful of companies that are busy buying back their own shares has proven to be a market-trouncing strategy for decades. Based on the current holdings of PKW, I don’t see that changing anytime soon.

Buybacks are a “dumb” strategy… that has proven to nearly always beat the markets. Shares of PKW are the simplest way to play it.