Japanese stocks are up 40% in less than five months…

What the heck is going on? And more importantly for us as investors, what country will be next to follow Japan’s lead?

The answers are simple…

As I’ve written many times in the last few months, Japan’s new leader Shinzo Abe is doing everything in his power to spark an asset bubble. He is taking Japan’s monetary policy to extremes that have never been attempted before.

Japanese stocks have soared 40% since mid-November, and surveys show the people of Japan now believe that prices (inflation) will rise again.

So as investors, we have to ask… Who’s next?

What country will be the next to follow Japan’s lead?

The country’s outgoing central bank chairman Sergei Ignatyev had a problem… He’s known as an “independent” central banker – one who doesn’t bow to the wishes of his government. He has been committed to protecting Russia from inflation since he took over in 2002. And he’s been praised for how he handled the global financial crisis in 2008.

But in Putin’s Russia, you can’t behave like this…

President Putin wants economic growth, period. And this old fuddy-duddy Ignatyev was more concerned with preventing inflation than following the wishes of Russia’s president. So Putin “recommended” a woman named Elvira Nabiullina as the replacement.

“It is hard to see what credentials Elvira Nabiullina has in order to run the central bank,” Renaissance Capital chief economist Ivan Tchakarov told the Moscow Times when the news came out. Ivan, this was an easy one… Elvira has the only credential she needs… She is a “friend of Putin.”

Elvira, no doubt, will get the job as central bank head, and she will do what Putin wants. To me, that means interest-rate cuts are likely in Russia, as well as other measures to artificially stimulate the Russian economy.

In short, Putin will do what Abe has done… He will strong-arm the central bank to artificially create prosperity. (Hey, everyone else is doing it, why shouldn’t Russia?) I expect a strong stock market rally in Russia over the next 18 months.

Right now, Russian stocks are cheap. And when they are this cheap, history shows you can make a lot of money. This chart shows you what I mean… the last two times Russian stocks were cheaper than they are today, you’d have made triple-digit profits in a relatively short period of time: 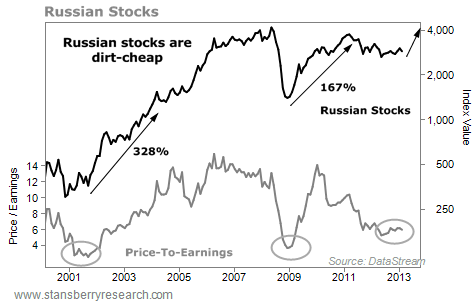 Still, I don’t want to sugarcoat it… Putting money to work in Russia is dangerous. I’ve put plenty of money to work in risky trades around the world in my career. But Russia still spooks me.

To me, Russia is what I call a “hold your nose and buy” trade… This is not a bad thing, actually…

The more undesirable an opportunity is when you buy, the bigger your profit potential is in that opportunity.

Russia is undesirable, but the situation now is just too attractive to pass up.

You’ve seen what’s happened to stocks in Japan when Abe decided to tell the central bank what to do… They soared! The same could happen in Russia. Also… Russia is cheap. And when it gets this cheap, you can make a lot of money.

The simplest play – and what I recently recommended for my True Wealth subscribers – is the Market Vectors Russia Fund (NYSE: RSX).

Buying Russian stocks is not like buying Japanese stocks. Russia is risky, and speculative, in the best of times. You can make a lot of money, or you can lose a lot of money.

If you’re bold, and willing to hold your nose and buy, definitely take a stake in Russian stocks.