Last week, I showed you a handful of charts that dispel a common misconception… one that is keeping thousands of retirees up at night.

I dispelled the idea that the U.S. economy is running off the rails… that we are in a recession, or worse, a depression.

Despite the facts I showed you… and despite the fact that stocks are still a good value (read more here), the stock market still hasn’t boomed like I believe it will.

Investors spent much of 2012 “stampeding” into bond funds.

Bonds are seen as “super safe” investment vehicles… much safer than stocks.

A stampede into bonds is a classic sign that people are scared of a volatile and uncertain stock market.

And even with interest rates near all-time lows, people were still moving gobs of money into bonds and bond funds.

As the chart below shows, they’re still putting money into bond funds… but they’re finally starting to put money back into stocks as well. 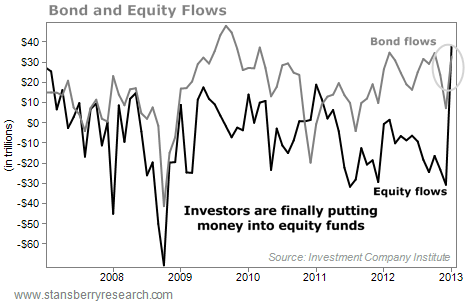 This spike higher in equity flows tells us that “Mom and Pop” investors are finally getting interested in stocks again.

Yes, stocks have enjoyed big returns in the past few years… but it usually takes several years of great performance to draw in the public after it has been burned like it was in 2008.

The charts in last week’s essay show that the economy is growing slowly. And despite what some folks tell you, inflation is still not a major concern right now. This is a good environment for stocks and – under normal times – bonds.

But after the “stampede” into bonds, I think the risk here is too high. Plus, the dividend yields on stable (and even growing) blue-chip companies like Automatic Data Processing (ADP), Wal-Mart (WMT), and Wells Fargo (WFC) make stocks a better choice for your portfolio in 2013.

We’ve had low interest rates, muted inflation, and relatively cheap stock market valuations for a while. And no surprise, the market has responded by approaching all-time highs.

Now, shifting investor sentiment could kick the rally into a higher gear. The recent spike in money flow is a clue that this is happening. That’s why it’s best to stay long stocks right now. They’ve had a great first quarter (up 10%)… but they’re going to go up even more in 2013.