Traders are often advised to “sell in May and go away.”

[ad#Google Adsense 336×280-IA]There’s a reason for that. Stocks tend to perform poorly between May and October.

In fact, the average return for those six months is slightly negative.

But this year, traders may not want to wait until May to go away.

If stocks keep following last year’s script, it’s a good idea to get out before the rest of the crowd… 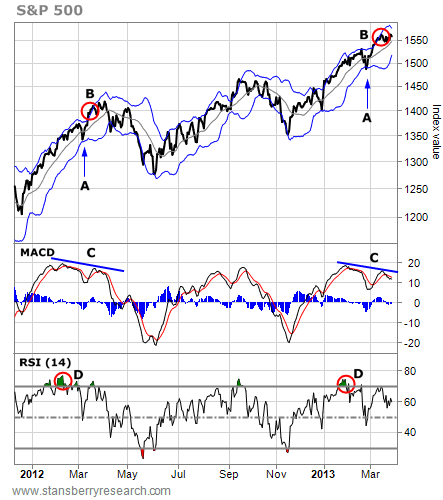 • Stocks went straight up from January 1 to the final week of February.

• There was a sudden and sharp pullback at the end of February/beginning of March (A).

• Investors bought into that pullback and the index quickly broke out above its upper Bollinger Band (B). And despite that overbought condition, stocks continued to chop higher for another couple weeks.

Finally, notice what happened at the end of the first quarter of 2012. Stocks dropped immediately and entered a correction that lasted 10 weeks and nearly wiped out all the gains for the year.

The S&P 500 is up almost 10% already this year and on the verge of making a new all-time high. But with all the warning signs we’ve looked at previously – and with all the similarities to last year – traders may not want to wait until May to go away. Now looks like as good a time as any.