The metal has long been viewed as a leading indicator of stock prices. Investors should pay attention, because when copper catches a cold, the stock market gets the flu. And last week, copper sneezed… 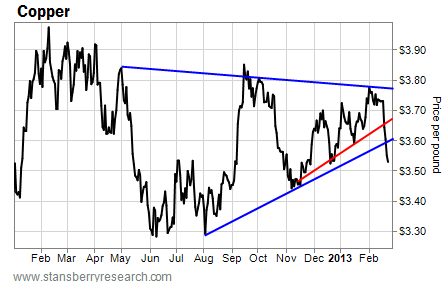 Copper broke down through its short-term rising support line (the red line). It also crashed through intermediate-term support (the bottom blue line). That’s one heck of an ugly move.

[ad#Google Adsense 336×280-IA]But even more significant is that copper has now broken down from its consolidating-triangle pattern (both blue lines), which suggests that the metal is headed even lower – perhaps all the way back down to last summer’s low.

We turned bullish on copper last June. Since then – and until last week – copper was up 14%.

That helped support the rally in the broad stock market.

But last week’s decline wiped out almost half those gains.

Copper is now trading back down to where it was in mid-December… and it looks likely to move even lower.

The most disappointing part of this development is that up until last week, copper was trading in a very bullish formation. The chart showed a pattern of higher highs and higher lows. It looked poised to break to the upside of the consolidating-triangle pattern. This bullish look to copper was one of the reasons that – despite all the technical caution signs flashing in the market – I wasn’t willing to turn aggressively bearish on stocks.

The sharp drop in copper last May coincided with an 8% pullback in the S&P 500. Stocks fell 8% in October as copper got hit hard, too.

I suspect last week’s sharp decline in copper is an early warning sign for a similar pullback in stock prices… And it’s why I’m willing to take a few short trades on any stock market strength this week.