The recovery is getting louder…

Nearly a year ago, I wrote: “The U.S. banking sector hasn’t been this healthy in 25 years…”

I explained that the banks, chastened by the near-apocalypse of the 2008-2009 financial meltdown, had renewed their commitment to conservative lending practices. That, combined with a resurgent housing market, was pointing to bigger bank profits…

Since then, things have only gotten better.

Banks today are nearly as strong as they’ve ever been.

The housing recovery continues to raise asset values and decrease liabilities for both small and large banks.

Many banks have settled class-action lawsuits that resulted from the credit/mortgage crisis of 2008-2009, too. This resolves some of the undefined, potential liabilities that the banks had to prepare for… and frees up even more capital for lending. 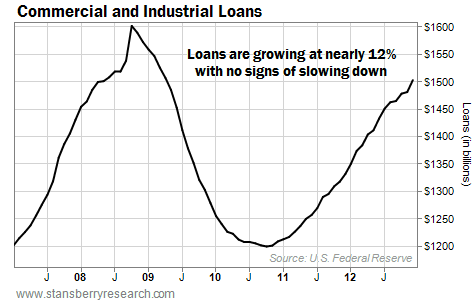 Remember, this is how banks make money – by lending. The more they lend, the more money they make.

With interest rates low, they can borrow money from depositors for next to nothing (as anyone with a savings account knows quite well). Then, they loan it out at higher rates (around 4%-5% for commercial loans). This “interest spread” allows banks to mint money.

Not only are bank profits rolling in, but almost all the banks are as healthy as they’ve been in almost a century.

A bank’s health is measured by how much capital it has relative to its assets. For most major banks, this ratio is higher than it’s been since the Great Depression. Part of the reason is regulation. The government raised the requirements after the 2008-2009 crisis… But much of it reflects the industry’s return to less leveraged and more careful banking practices.

Another measure of health is the institution’s “liquidity” – how much of its assets are shorter-term in nature. Liquidity helps banks react to emergencies and opportunities… You can’t deploy cash unless you have it on hand. Right now, liquidity is at 30-year highs.

There are many other banking metrics that show signs of improvement. The loan-loss reserves are dropping as the economy grows and borrowers are better able to meet the commitments.

Most banks have been forced to be extra cautious over the past few years and hold back earnings for possible defaults and losses. But fewer delinquent loans means more income and fewer losses. Many of the assets on the books don’t need the same super-conservative loan-loss provisions. Reallocating that set-aside money would increase book value.

This is good news for banking in general. And it’s one more reason I like the banking sector.

My top recommendation in the banking sector, Wells Fargo (NYSE: WFC), is still a “strong buy.” And I’m finding more great opportunities in the sector.

The crisis has passed. And the recovery is gaining strength. Now is a good time to own bank stocks.