Over the next couple years, you could make low-risk, triple-digit gains in one of the most beaten-down commodity sectors in the world: uranium.

It won’t happen overnight. But as I’ll show you today, a big bull market in uranium is almost inevitable.

The price simply will not stay as low as it is today. And before the run is over, we’ll see prices double… or more.

Right now, the spot price of uranium is so low, miners are losing big money selling the stuff.

You see, it’s not cheap or easy to pull uranium out of the ground.

The mining costs alone are $85 per pound.

Once you add in other expenses, it gets worse.

As I told DailyWealth readers last month, the world’s largest uranium producers are spending an average $106 per pound.

Areva, for example, produces 16% of the world’s uranium. In 2011, it produced 23 million pounds of uranium… and spent almost $163 per pound doing so. That was, by far, the highest price I found among major uranium producers. But none of the numbers looked good.

Uranium spot prices are around $40 per pound. Long-term contracts might pay $65-$70 a pound. Areva is losing about $100 on every pound it sells. That’s a great way to go out of business.

And that’s exactly why this situation won’t last.

Uranium producers are already making massive cuts in their capital budgets. As I told you back in June, giant miner BHP Billiton (BHP) chose not to expand its giant Olympic Dam mine.

This is a classic example of the cyclicality of resource markets. When the price of a commodity soars, companies expand production and flood the market with supply… and the price collapses. But when producers cut production, stop spending money on new production, go out of business, and supply tightens… the price soars.

That’s what happened in the last bear market in uranium… Uranium production bottomed back in 2003, and the price began to rise at the same time. That bull market saw uranium prices go up to $130-plus per pound by mid-2007.

I believe we are in the early days of a similar move now. Supply is tightening… And the price should rise to meet the cost of production. That’s more than 100% over today’s levels.

When that happens, one of my favorite public uranium mining companies, Cameco (NYSE: CCJ), could see a sharp increase in share price…

Back in February 2011, uranium prices were $65 a pound. That’s just 44% higher than where it trades today. And Cameco traded for nearly twice its current price. 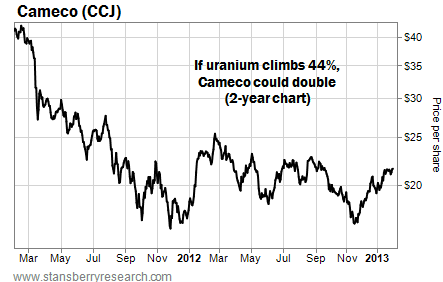 With Cameco still near its bear-market lows, the risk here is small. But the upside is tremendous. My S&A Resource Report readers are up 15% on Cameco already, but I believe we could double our money.

At some point – and sooner rather than later – uranium prices will rise. And when they do, Cameco shares will soar.