Early last month, I showed you a new upswing in the price of copper. China – a major copper consumer – is manufacturing more goods and increasing exports. That’s going to support copper prices…

And it’s showing up in iron ore prices as well. This could be a big commodity trade for 2013…

[ad#Google Adsense 336×280-IA]Iron ore is used in nearly everything, from building materials to consumer appliances.

The chart below shows the price of iron ore at the largest port in Northern China, Tianjin.

Tianjin is the world’s fourth-largest port and the main import terminal for Beijing. 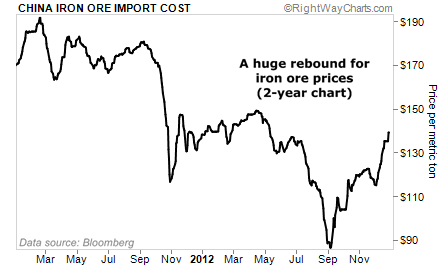 By August, many analysts and experts cited the collapse in iron ore prices as a sign that the “commodities super cycle” was done. The commodities “super cycle” refers to three to four decades of growth in commodity demand, spurred by globalization and the rise of China. If it is dead, commodity investors will need to adjust their expectations.

But in a recent note, Colin Fenton – head of commodities research at JPMorgan – called this year’s volatility in natural resources just a “temporary consumption slump”… not – as many investors worry – the “conclusion of a multi-decade investment boom.”

The recent downturn in China’s economy reflected the economic woes of the nations that consume its goods… like the U.S. and Europe. But since August, things have been looking up as demand for copper, iron ore, and coal has surged…

Demand has increased so much that on Friday, December 21, iron ore stockpiles at China’s major ports fell to a two-year low – just 73.8 million metric tons. The stuff is moving again… Commodities – and China – are beginning to rebound.

I agree with Fenton. The enormous recovery in iron ore prices – plus a recovery in copper – is a sign that commodities weathered a simple move lower in the larger super cycle. And that means commodity investing could be looking up for 2013.

As longtime Growth Stock Wire readers know, commodities move in cycles. And as we’ve discussed, the key to making money in commodities is to get in the cycle early. That is right now for iron ore.

While we’re early in the uptrend, giant iron miners like Vale (NYSE: VALE) and Cliffs Natural Resources (NYSE: CLF) are beginning to rally from recent low prices. And these companies are cheap. Right now, they trade for about five times estimated 2013 cash flows, according to Bloomberg. That’s far lower than they traded back in 2009, which was the bottom of the market for resources.

These companies, which will produce much larger profits from the recovered iron prices, offer outstanding rewards with only modest risks.

If you are looking for a good commodity trade for 2013, consider iron ore.