Last week marked the 25th anniversary of Black Monday, the day the stock market collapsed in a panic. As you’ll see below… the market hasn’t learned much since then. Nor will the market ever grow wise… as it is made up of humans who willingly forget their fears so that they may indulge their greed.

This week, I write you a warning: Not many of you will take me seriously. Some will argue the fine points and call me a fool. But some… maybe one or two kindred souls… will see the numbers I offer below and feel a slight chill in their bones. Another crash is brewing, my friends. They all start the same way, with a credit boom…

In other words, the Dow is only about 4% below a new, all-time high mark.

Does it seem like our economy is really back to the booming days of the mortgage bubble?

Sources in the credit markets report the most aggressive pricing they’ve ever seen – as aggressive as the peak in 2006 and 2007. Prices on commercial mortgage-backed securities (CMBS), for example, are now well over par. That’s up from trading around 50 cents on the dollar back in March 2009. CMBS issuance this year could top $40 billion, almost double the amount of new issuance the market expected.

Support for the credit markets comes from institutions (banks, insurance companies, pension funds, etc.) searching for yield. As the Fed and the European Central Bank have intervened massively in the sovereign bond markets and the mortgage markets, they’ve driven yields on short-term debt down to almost zero. Institutions are then forced to reach further out on the interest-rate curve, in terms of both risk and duration.

We decided to solve our dependence on credit and deficit spending… by creating record amounts of new credit and record annual deficits. Would anyone like to offer me odds that this approach will lead to a happy ending?

And… just as knowledgeable and experienced investors are beginning to worry about a new bubble in the credit markets, guess who has shown up to buy hand over fist? Oh no. Individual investor interest in corporate debt and securitized debt is reaching a new high. The public’s willingness to buy debt seems to be just as correlated to high prices as the public’s willingness to buy stocks. They always buy the top in both markets.

No, the public’s interest in a frothy market isn’t unusual… but it is extremely dangerous. The public – unlike pension funds, insurance companies, and banks – is likely to panic at the first sign of rising interest rates. Buying at the top, as folks are doing right now, sets the stage for a collapse later. The popular iShares U.S. Aggregate Bond Fund (AGG) has increased its shares outstanding 16%. The fund now has over $15 billion in net assets. It now yields far less than 4%. 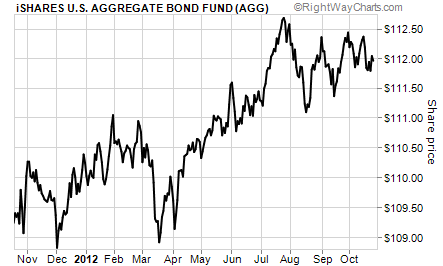 Most worrisome, however, is the tremendous spike in high-yield issuance and prices and the collapse in yield. The market recently recorded a new all-time low yield (6.2%) for non-investment-grade debt. (The market’s yield is determined by the Merrill Lynch High Yield Master II index.)

As a result, the average price for a junk bond today is about $1.04 on the dollar. Junk bonds are up around 13% so far this year. Again, the public’s involvement in these markets is soaring. The Barclays Capital High Yield Bond Fund (JNK) is now holding $12.5 billion in net assets… the iShares High Yield Corporate Bond Fund (HYG) is now holding $17 billion in net assets. My sources in the market expect total high-yield issuance to set a new all-time record this year, beating 2010’s record of $264 billion.

Let me say this as plainly as I can: this is not a good time to be an investor. People who buy debt securities at these prices are unlikely to walk away unscathed. Either inflation or default will lead to far greater losses, on average, than the paltry interest offered today – especially for bonds with long durations or risky prospects. Likewise, as the credit being created today floods over into stocks, opportunities there will be diminished.

The irony is… these conditions are very likely to last for some time. Prices on credit will continue to rise. Spreads and yields will continue to contract. We’re entering a manic phase of this bull market in debt. I don’t know how long it will last… but at least another year (and maybe three) seems like a reasonable guess. It will take time for this enormous new excess amount of credit to roll over into the real economy and into the stock market. It will take time before this massive inflation of credit turns into a massive inflation of money. And in the interim, I expect the stock market to go up… way up.

If I believe we’re entering a new, even steeper up cycle in the markets, why would I tell you that now is not a good time to be an investor?

I define investing as permanently delaying the consumption of capital. You do not want to buy low-yielding assets or companies at a high multiple of earnings right now if you plan to hold on to those assets for the long term. At some point in the relatively near term, there will be a crash in the credit markets (like there was in 2002 and in 2008). Those are the points in time when you want to put your capital to work on a permanent basis. Right now, all you have left is speculation. It’s time to look for aggressive, leveraged, fast-moving opportunities. You need deals you can get in and out of in six- to 12-month time frames.

If you don’t see great short-term opportunities, don’t worry about it. Just start building your cash reserves. Understand… I think we’re still a long way from the top… but we’re now far enough away from the bottom that it’s time to start thinking about risk. It’s time to focus on return OF assets instead of return ON assets. Never forget Buffett’s old saying: “I try to be cautious when I see others being greedy, and I try to be greedy when I see others being cautious.” Nobody in the credit markets is being cautious anymore. And the credit markets rule the world.