“THIS is what a market bottom in copper feels like,” my colleague Steve Sjuggerud told me.

At the time, investors hated copper. The market had reached its “puke point,” as Steve likes to say. Copper was down 29% in the previous eight months and down 5%-plus that day alone. He saw a chance to make a ridiculous amount of money if things got just a little “less bad” in the copper market.

But I’ve never seen him so confident in a short-term opportunity.

The stock soared 20% over the following week.

Today, the copper market is at a similar “puke point.”

In fact, today’s opportunity is even better than what Steve saw last fall.

This setup has only occurred three times in the last decade. And investors could have pocketed 172% gains on average in just over a year. We could be looking at a similar trade now.

Copper is one of the most useful and abundant base metals in the world. It’s a vital part of building construction, alloys, electronics, and more. Copper’s main users are in fast-developing emerging markets… most notably, China.

China accounts for roughly 38% of global copper demand. Its domestic demand has increased over 13% a year for the last 20 years. In short, a healthy global copper market depends on China. And that’s a big reason why you have such a great buying opportunity today…

The slowdown in China’s economy and the expected slowdown in its domestic copper demand have crushed the copper price. It’s fallen more than 25% in less than year.

I believe the selloff is overdone.

The big news sources enjoyed reporting that China’s copper imports fell 17.5% between May and June. What they didn’t tell you is that June imports were up 24% over the previous year. And July imports were up again.

In other words, a slowing Chinese economy doesn’t mean copper demand will plummet. It doesn’t necessarily mean demand will fall. Slower growth is the likely scenario. But it looks like the market is pricing in a complete collapse.

We can see this negative sentiment through futures trades. Today, copper traders are near record-short levels on copper. This means they expect copper prices to continue to fall. But historically, when traders agree on something, the exact opposite occurs. Prices rise.

And when copper prices rise, Freeport-McMoRan soars. Take a look… 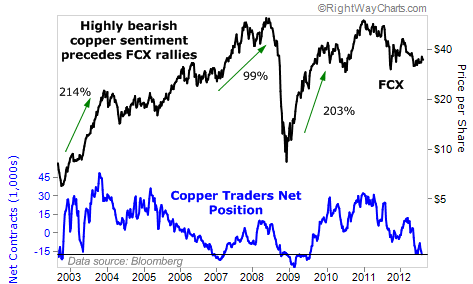 The net position (long positions minus short positions) of copper futures traders is in blue. The black line is Freeport-McMoRan. As you can see, when copper traders all expect the metal to fall, shares of Freeport begin dramatic rallies.

We’ve seen today’s setup three times in the last decade. All three trades have been big winners. On average, investors would have walked away with 172% gains in just over a year. The specifics of each trade are below…

Importantly, Freeport appears to be beginning a new uptrend today. Shares recently broke out to a three-month high. This could be the beginning of the next big move higher…

Of course, nothing is a sure thing. But historically, this trade has been good for triple-digit gains in just over a year.