I GUARANTEE someone will get rich on the “Widowmaker Trade” someday…

The question is… is today the day?

Let me explain this guaranteed trade…

In the late-1990s, I was on the phone with one of the smartest traders I know.

I didn’t have a response… I honestly hadn’t even considered that trade before.

“It’s a no-brainer,” he explained.

“People will get rich on this trade… Japanese interest rates simply have to go up.”

Little did my friend know, he had just made the Widowmaker Trade…

He was right about one thing: Japanese interest rates do have to go up… but the catch has always been – WHEN?

For 15 years, many of the smartest people in the world have made this “no-brainer” trade. And for 15 years, this trade has made those people look stupid…

Over those 15 years, interest rates in Japan have fallen from 2% down to as low as 0.5%. I don’t know anyone who has actually made money on this trade.

Why do smart people fall for this trade? Because the story is pretty tight…

Japanese interest rates do have to go up… The reasons why are too numerous to list. Here are a couple popular ones:

1. Japan’s national debt (as a percentage of its economy) is higher than any major country’s – by far. At an insane level of over 200% of GDP, Japan’s debt load even makes Greece look safe and sound. Yet get this… Japan has the lowest borrowing cost of any major country. One of those simply has to change (the debt level or the interest rate). And higher interest rates is the no-brainer bet of the two.

2. Japan’s population is aging. That means more older “mouths to feed” and fewer workers to feed those mouths. Meanwhile, Japan has just hit its Social Security “cliff.” Annual Social Security-type payouts in Japan now exceed the money that comes into the program.

These two reasons are just the obvious ones. The list goes on… and on.

But is NOW the day to make the trade… to bet that the universe will right itself?

The Widowmaker Trade has gone on so long, most people have given up on it. Ah, but what’s this?

The trend is now finally – possibly – turning in your favor…

Just a couple weeks ago, Japanese interest rates hit their low for the year, at around 0.7%. Now they’re trending up – above 0.8%. 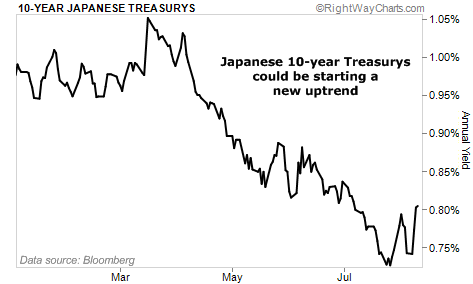 But this is a trade the world has forgotten about… It makes total sense… And now the trend is moving in the right direction as well.

Me? I’m not. I am not bold enough to trade it… I’ve watched smart friend after smart friend try to make this trade – and lose – over 15 years.

As I said at the beginning of this letter, I GUARANTEE someone will get rich on this “Widowmaker Trade” someday.

But it won’t be me, now. I have never lost money on this trade… because I haven’t been bold enough to trade it. I plan on keeping that flawless record.

If you’re bolder than I, you have an easy way to trade it – by buying the PowerShares DB Inverse Japanese Government Bond ETN (JGBS). As you might guess, since JGBS was launched last year, investors have done nothing but lose money in it.

I guarantee someone will get rich on this trade someday.

Is today the day? Is that person you?

All I know is, it won’t be me. Let us know if you make the trade and succeed.