For the past year, the positive silver headlines have been few and far between.

Ever since the poor man’s gold peaked near $50 in April of last year, it’s become a despised metal.

Admittedly, it’s been languishing near $27 since early May not far from where it was for the first time – in this bull market – back in late 2010.

[ad#Google Adsense 336×280-IA]But as I’ll show you, right now a number of technical, seasonal, and sentiment indicators are pointing upwards for this volatile metal.

This could well be the critical turning point silver investors have been waiting for.

One of these indicators is the resilient price of gold.

Silver has always pretty much been gold’s lapdog and on a relatively short leash at that.

As a rule, silver prices usually follow the direction of gold. But as long time silver investors recognize, the moves are amplified both on the downside and the upside. Silver prices are simply more volatile than gold prices.

As for gold, since it peaked about a year ago, it seems to be drifting aimlessly in zombie land. For the better part of the year it’s been consolidating about 16% below its previous peak of $1,900.

Today, at $1,600, gold is back to levels its first saw a whole year ago. What investors need to pay attention to is the gold to silver ratio.

Before the financial crisis, the gold/silver ratio was around 50 and trending downward. That meant at the time an ounce of gold would buy you 50 ounces of silver.

Then in late April last year silver exploded higher. As the silver price rose an ounce of gold bought a smaller equivalent amount of silver, pushing the ratio down below 30.

That was short-lived, as silver’s dramatic rise was unsustainable. I had said so at the time.

Today, the ratio recently returned to a high level near 60 which is also unsustainable in its own right on the other side of the trade. It’s why silver’s looking rather undervalued relative to gold right now.

My long term target for gold still remains $5,000. As this bull progresses, I think we’ll see the gold/silver ratio move down closer to 20 which would imply that silver eventually reaches $250.

Gold also normally starts its best seasonal period now, as the summer doldrums come to a close. Since its secular bull launched back in 2001, gold has averaged 19% gains between the end of July and the end of May.

If silver follows and tacks on some leverage as well, we could enjoy substantially higher silver prices by next spring.

But thanks to wildly bullish fundamentals, silver could retest its 2011 peak, or better it, by then.

As you know, it’s no secret that Europe is mired in ongoing bank and sovereign bailouts, the U.S. presidential election will bring further uncertainty, and China could be set for a marked slowdown unless it makes its move on stimulus.

I expect lots more money printing as a result, whose inflationary effect is always kind to silver and gold.

On a pure technical price basis, silver is looking quite bullish as well. 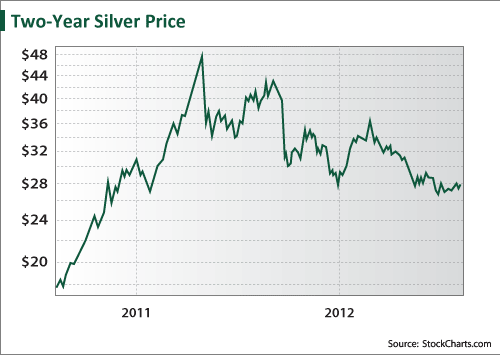 Silver appears to have bottomed recently in the $26-$27 range. It’s not the first time this price level has been relevant either.

Back in late 2010, $26-$27 acted as resistance where silver’s price had stalled. Late in 2011, and again in the last couple of months, silver has retested those prices, but this time it’s provided support, forming a “silver staircase” similar to the “golden staircase” I’ve written about before.

It now looks like we could be near a new low. Since late June, silver’s been establishing a series of higher lows, providing additional support for a bottom.

But those aren’t the only reasons to be bullish on silver these days-or gold for that matter. Here are three other reasons why the outlook for silver is higher from here:

Stocks have been in a strong cyclical bull market since bottoming in March 2009. The S&P 500 has gained nearly 105% over the past 41 months. But it’s getting long in the tooth, as the average cyclical bull during secular bears tends to last about 35 months.

Yet precious metals have a tremendous ability to rally during cyclical bears. While the S&P 500 lost 57% from October 2007 to March 2009, gold staged a respectable move higher of 25%.

Whenever the cyclical bear comes out of hibernation, I expect gold and silver to benefit from their established safe-haven status.

Silver contracts are traded on futures exchanges. A useful barometer of who’s long and who’s short silver can be garnered from the weekly Commitment of Traders (COT) reports prepared by the Commodity Futures Trading Commission (CFTC).

Recent COT reports show that the big speculators (dumb money) are exceptionally bearish on silver right now, at levels reached only four times since this silver bull began in 2002.

Each time that’s happened since, silver has embarked on an impressive rally, climbing at least 70% and even clocking up to several hundred percent gains.

Worldwide, investors are gravitating toward physical bullion, having tripled their purchases since 2007. Clearly, people are becoming apprehensive of the state of the world’s finances, economies, and governments.

ETFs backed by physical bullion have been losing considerable ground to holding the real thing in hand.

When people go out of their way to get the real thing, they don’t readily turn around and trade it, even if the metal starts to make new highs. For all practical purposes, bullion purchased by individuals who take physical possession comes “off the market”. And that too is bullish for silver prices.

So as we enter the strongest seasonal period of the year for precious metals, political and economic factors could help drive explosive demand for silver.

That combined with the overextended Gold/Silver ratio, the extreme short position held by silver speculators, the push for physical bullion, and the bottoming price, means silver is being primed for substantial gains.

If a perfect storm develops for precious metals, silver could well retest, or even break through its all-time highs by next spring, allowing for almost a 100% gain from current levels.

My advice: Don’t be part of the “dumb money”. Instead, use this opportunity to go long.