The technorati took me to task. So did Wall Street.

They were agitated by an article I wrote in May explaining why the world’s most hotly anticipated IPO, Facebook (Nasdaq:FB), was worth a mere $7.50 a share at best.

“Out of touch,” one of the critics said. A “luddite” charged another.

“Doesn’t grasp the significance of so many users,” one Wall Street insider opined–who happened not coincidentally to work for one of Facebook’s investment bankers.

Ten weeks later, Team Hoodie hasn’t done much to merit an upgrade either.

Sorry guys…Facebook is still only worth $7.50 a share – likely less.

At the time I reasoned that Facebook’s valuation simply didn’t merit the 100 times earnings IPO price of $38 a share based on comparable figures from Google (Nasdaq: GOOG) and Apple (Nasdaq: AAPL).

But there were a host of other factors as well.

I cited falling revenues, a lack of control over the mobile market channel, increasing distrust from customers who were voting with their feet and the concurrent departure of major advertisers like GM which will cost Facebook an estimated $10 million a year in revenue alone.

I also posited the assumption that Facebook would be unable to maintain the 100% plus growth that many investors believed was baked into the proverbial cake.

Fact is, Facebook still hasn’t figured out what it wants to be when it grows up.

Despite the fact that CEO Mark Zuckerberg does have some excellent advisors, the company isn’t going to be able to hide the fact that its “business” is nothing more than a colossal time-wasting collection of personal interest items for much longer.

Other problems abound, too. All of them point to a lower share price.

For instance, Team Hoodie seems more intent on creating new applications than they do on making money from customers. There seems to be a disconnect between what’s cool and what actually makes money.

Sure, it gets Facebook on a mobile device but there’s no plan I can discern for how the application creates a different experience nor how it will generate money from all those eyeballs.

Then there’s the Facebook phone. First it’s happening, then it’s not. This suggests that Team Hoodie may have serious internal strategy battles and be fraying around the edges.

Call me crazy, but I think Facebook’s numbers reflect this already.

One quarter into its public life, Facebook’s net income dropped by $295 million to a loss of $157 million.

The cost of customer acquisition is going up so that’s clearly digging into its bottom line.

So is the way the company chose to account for stock-based pay in adjusted earnings. Had management not chosen to exclude stock-based pay, the loss may have been orders of magnitude worse.

And finally, Facebook has its own fiscal cliff of sorts.

The 91-day lock up period imposed on employees and company insiders following Facebook’s IPO expires later this month. That means another 268 million shares could come up for sale further depressing the value of the 2.1 million shares already outstanding.

With the stock now off $16 from its $38 IPO price there’s definitely an incentive to sell. A large number of employees are probably anxious to get out before the markets destroy their windfall gains. I know I would be.

As the chart below shows, former employees have already hit the dislike button and sold. 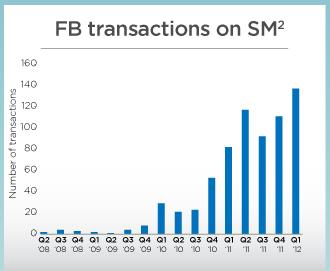 Investors are the next biggest group of sellers by total dollar volume accounting for 12.4% of the total and 4.8% of the number of sellers. Perhaps they haven’t given up the ghost yet.

Either way, the chart is kind of scary when you consider the exponential growth associated with Facebook stock sales because the old adage certainly applies. What goes up, must come down.

Don’t get Zuckered again. The clever folks are the ones who already sold.