Countries like Germany – which has zero seismic activity and rests 9,000 miles from Japan – announced plans to abandon nuclear power. The price of uranium, which powers nuclear plants, tanked…

[ad#Google Adsense 336×280-IA]To make huge gains, you have to buy assets when nobody wants them… And right now, virtually nobody wants uranium.

Prices are near the lowest point we’ve seen since 2008.

A rally here could offer a fantastic money-making opportunity in small uranium stocks. But timing is everything.

It shows Uranium Participation Corp., a holding company that tracks the price of physical uranium.

As you can see, the Fukushima disaster in March 2011 devastated the price… and it’s continued to drift lower since. 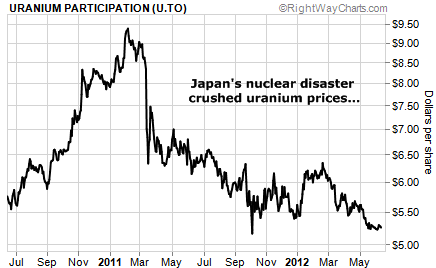 That’s the word from my friend Jim Paterson, CEO of Kivalliq Energy, a small uranium explorer with a great discovery in Canada. On a call last week, he told me…

I think you will see that uranium supply side won’t be able to meet demand in five to seven years. And that’s great for us… that’s exactly what we want to see.

Of course, you would expect the CEO of a uranium explorer to be upbeat about the uranium market. But Jim has reason to be optimistic…

To start, one of the largest future sources of uranium – expanded operations at the Australia’s Olympic Dam mine – is on hold.

Owned by the world’s largest mining company, BHP Billiton, Olympic Dam is the largest-known uranium deposit on Earth. It represents 40% of all the uranium in the ground. Today, it produces about 8.8 million pounds of uranium per year. That’s more uranium than we produce in all the mines in the U.S.

BHP Billiton had planned to expand the mine and increase uranium production to about 33 million pounds a year. Now, BHP Billiton seems prepared to delay the $40 billion expansion by at least two years.

That’s a colossal amount of uranium supply that would be unavailable if this mine doesn’t get built… And it puts enormous pressure on future uranium supplies.

At the same time, a key source of demand may be picking up again… China accounts for 40% of all new reactors under construction. But after last March’s Fukushima disaster, China put a moratorium on all nuclear projects. Now, though, China is poised to lift that construction freeze… A return to its 20-year plan for nuclear construction will be a huge boost to demand.

So we have renewed demand combined with uncertain supply. We should begin to see the uranium price respond to those pressures.

If you are looking for the best and safest way to play the uranium miners, consider Cameco (CCJ). This $7.5 billion mining behemoth is the safest pure uranium-mining company out there. And its future looks bright.

This is a great company that’s been beaten down over 32% this year. It’s down 56% from its February 2011 high. If uranium returns to the uptrend it saw two years ago, Cameco could easily double from here.

But it’s not time to buy just yet.

I want to see an uptrend in uranium first. Until we see sentiment start to turn around… we don’t know how far this sector could fall or how long it can languish at its current level.

Once we see a shift start to take place… when the fear over nuclear fuel ebbs just a bit… we’ll have plenty of time to build a portfolio of high-quality uranium companies.