This particular country’s stocks have to rise by 257%…

… just to be in line with a benchmark U.S. index.

And this trade is not in some small, obscure country…

[ad#Google Adsense 336×280-IA]I’m talking about Japan – one of the world’s largest countries.

And the trade I recommend is a basket of Japanese stocks that trade on the U.S. stock market as an exchange-traded fund (ETF).

On average, they’d have to climb 257% to be in-line with the valuation of the Nasdaq Index, which holds a lot of small-cap U.S. stocks. Take a look:

Japanese stocks would have to soar by triple digits based on these major measures of value. (The average of these three numbers is 257%.)

In my opinion, the Nasdaq is not even very expensive. Japan is just SO cheap.

More importantly, on a RELATIVE basis, this is the best value Japanese stocks have ever been.

It is crazy. Bonds pay less than 1% interest in Japan today. Meanwhile, stocks pay a dividend of greater than 2%. It’s only a matter of time before Japanese investors start moving out of bonds and into stocks. They ought to do it sooner than later… It’s the right thing to do.

Japanese investors have another good reason to buy as well… Based on the price-to-book ratio – a simple, clear measure of value – Japanese stocks are cheaper than they’ve been in decades. 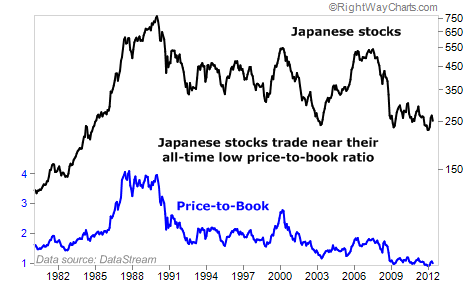 My True Wealth Systems numbers “only” go back 30 or so years. But as you can see, right now, Japanese stocks are bumping along levels that are as cheap as they’ve ever been.

However, on my True Wealth newsletter’s recommended list, I have shares of the WisdomTree Japan SmallCap Dividend Fund (DFJ). This ETF mimics the Japanese small-cap index. And there’s a low-risk strategy for DFJ that could really make you some big money…

This fund trades at around $42 as I write. You could buy it today and set a stop loss at $38… That’s the low that was hit when the tsunami struck Japan in March 2011, and it’s also the 2010 low. If DFJ falls below $38, something is really wrong… And it’s time to move along.

So you’re risking a loss of less than 10%. But the important thing here is, your upside is hundreds of percent.

In short, you ought to own Japan… And with DFJ, you have an easy way to minimize your downside risk and maximize your gains.