Everyone believes interest rates have to go up…

After all, at less than 2%, 10-year Treasury bond yields are the lowest in U.S. history. They HAVE to go up… right?

If you believe that, you are part of “the crowd.” History says rates could stay this low for a long time. And possibly fall even lower in the next few years. Let me explain…

In 1996, Japan cut interest rates from above 2% to next-to-nothing – just like Fed Chairman Ben Bernanke did a couple years ago.

As the chart below shows, long-term interest rates in Japan (the solid red line) followed the short-term rates (the dotted red line) lower. 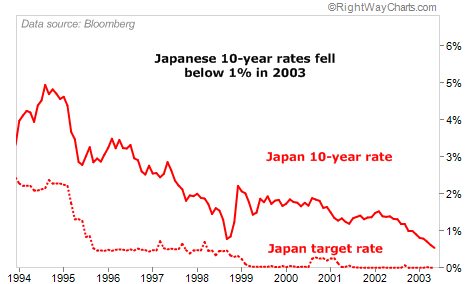 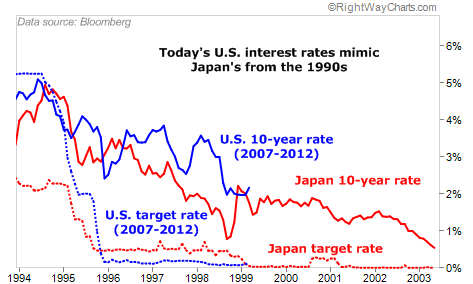 So could long-term interest rates fall farther in the U.S.? Absolutely.

They’re in a downtrend, as the chart shows. And we’re right on track with Japanese rates from the ’90s.

Right now, 98% of people think rates can’t go lower (according to the Barron’s poll). And a lot of smart analysts are betting on them going higher.

They could very well be right. But as history shows, it’s NOT inevitable.

And when a huge majority believes something, the market has a habit of doing the opposite.