The gold bull market is over… get out while you still can!

If you believe the mainstream media, that’s probably what you’re thinking right now. Gold prices have trended lower over the last eight months. Many investors now wonder if the 11-year gold bull market is finally over.

But the recent correction is nothing to worry about. The fundamental picture for gold has not changed, as I’ll explain today. And based on history, we can expect to see a new high in gold prices in 12 months or less.

After all, gold prices are up for the 11th straight year.

And this slight weakness has investors scared.

But the main drivers of the gold bull market are still intact.

John Doody is the editor of the excellent Gold Stock Analyst newsletter. His gold stock recommendations have returned 40.6% a year over the past 10 years. He knows a thing or two about the market for gold and gold stocks.

John believes gold will go higher because of something called the “real interest rate.” He explains this concept in his most recent issue…

The real interest rate (RIR) is a concept seldom discussed in the media, but it’s one all too familiar to savers, even if you don’t recognize the term.

The RIR is the risk-free rate of interest adjusted for inflation. The current RIR in the U.S. is -2.6%, calculated by subtracting the current 2.7% CPI [Inflation rate] from the 0.1% return on 30 day T-bills [risk-free rate].

“That’s all well and good,” you might say. “But what does it have to do with gold prices?“

John writes: “Whenever the RIR is negative, gold does well as investors seek hard assets which cannot be printed…”

In other words, when interest rates are low, investors aren’t penalized for holding gold, which pays no dividend… so investors flock to the metal to protect their purchasing power.

The chart below shows John’s idea in action. Take a look… 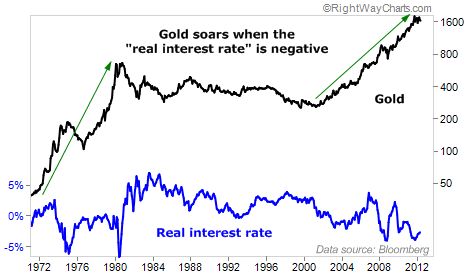 As you can see, gold prices soar when the real interest rate is negative. And right now, we have a promise from Federal Reserve Chairman Ben Bernanke that interest rates will stay near zero for at least two years.

With short-term rates near zero, ANY inflation means negative real interest rates. So gold should thrive for AT LEAST the next two years. 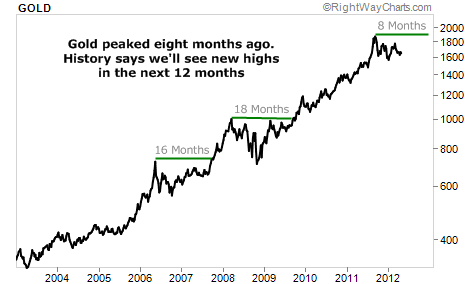 It’s been eight months since last September’s $1,900 high in gold prices. So if we follow history, we can expect gold to make a new high at some point in the next 12 months.

Of course, this is no guarantee. But as Mark Twain famously said, “History doesn’t repeat itself, but it does rhyme.” Based on history, I’m confident gold will make new highs in the next 12 months.

Even if that’s wrong, you still don’t need to worry about gold. The real interest rate should remain negative for at least two more years. The long-term fundamentals for gold are still in place.

So stop worrying. Gold will continue to thrive…