You may have heard that China just posted the biggest trade deficit figures in over a decade.

Naturally, this caused the usual suspects who have been waiting – some would say hoping – for a Chinese crash to jump up and down with excitement.

But not so fast guys… one set of figures doesn’t tell the entire story.

The truth is the $31.5 billion trade deficit is actually a sign that things inside China are growing and that imports are becoming a more viable part of China’s future than ever before.

[ad#Google Adsense 336×280-IA]Up some 39.6% year-over-year, the numbers are far ahead of expectations and a good deal higher than the 15.3% contraction China experienced in January.

True, exports climbed at only 15.3% versus the 18.4% expected rate, but that’s still plenty positive at a time when the so-called developed world is on track for overall growth of 1.3% according to The Conference Board.

Get used to it.

As China’s wealth rises and its internal consumption strengthens, imports are going to decouple from exports and deficits like these will be the norm.

If anything, these numbers reinforce the notion that investors should be actively looking to China and be accumulating Chinese investments.

What Smart Investors Recognize about China

For starters, how China processes its imports. It used to be that the majority of stuff we sold them was fashioned into exportable goods that came boomeranging back to our shores as finished products.

In other words, we sold China handles and steel and they sold us shovels.

Maybe I’m exaggerating, but not by much. Today, more of China’s imports now go straight to domestic consumption than we’ve ever seen before.

What’s happening is not magic. There is no rocket science. No hocus pocus.

The country is simply becoming self-sufficient, just as we did shortly before we came into our own — summarily displacing England in the global scheme of things.

Smart investors already understand…even if everybody else has yet to recognize the inevitable.

More understand this every day. They may not like it, but that’s another story.

Take shoes and clothing, for instance. China’s known for sweatshops and turning out gobs of these things for markets around the world. Export growth did fall 2%, but the growth curve is still up.

The drop simply means more of its products are being diverted into native Chinese markets as domestic consumption rises.

Or take electronics and machinery. Year-over-year manufacturing for exports has dropped by 23%, falling from an 11.5% growth rate to only 8.8%.

But the larger truth is that actual production is still rising. Chinese consumers are absorbing the rest.

Cars, parts, blue jeans, toys, or copiers…it doesn’t matter. The story is being repeated in nearly every industry in China.

As the Red Dragon’s economy accelerates and the 600 million strong middle class comes into its own, frankly we’ll be lucky there’s anything left to export.

Where to Find Opportunity in China

Call it a huge slice of humble pie or a lesson in irony – take your pick – but America’s future is in learning how to feed the dragon.

So what do you do and where do you look for opportunity?

First, take a look at what the data really shows.

Second, understand what those figures mean to China’s industries.

Because China is a centrally planned economy, the best opportunities will be at either end of the curve from here on out. They will be found in sectors where China is either exceptionally strong or exceptionally weak.

Like agriculture. Imports in that sector have quintupled since 2000. With 1.3 billion people to feed and total arable land of only 0.08 hectares per person, China needs to import large amounts of agricultural products.

Or energy. It’s difficult to overstate China’s involvement in the global energy markets.

Because the nation is growing so rapidly, China’s appetite for all forms of energy is already voracious, and will only become more so in the years ahead. By 2025, for example, China is expected to account for huge percentages of global demand.

That’s why China is doing everything it can to buy reserves around the world today. 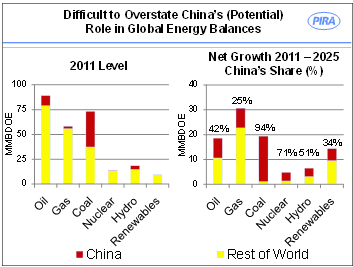 Third, keep the number in perspective with regard to China’s overall growth targets.

As measured by the MSCI China Index, the broader Chinese markets are up 11% year-to-date, and companies that are participating in that growth are the ones that are outperforming.

Not bad for a country that’s supposedly in decline, eh?

Three Investments That Feed the Dragon

Here are three ways for savvy investors to ride this trend into the future:

ABB LTD. (NYSE: ABB) – Zurich-based ABB has been active in China since 1907. They make the electrical infrastructure that brings power from power plants, through transmission lines and substations all the way to the users. They’re also a key player in control systems, robotic automation and energy management. The company doubled “the annual average investment in the past years” according to its 2011 ABB Group annual report. ABB also achieved record high revenue growth of 21% in 2011, reaching $5.1 billion.

General Motors Co. (NYSE: GM) and Ford Motor Co. (NYSE: F) – Because they were a little late to the party in China, Ford likely has a higher future growth rate “in country.” That gives the company momentum and the incentive to really press hard rather than sitting on their laurels. According to Zacks, the two companies posted growth figures of 30% and 28% respectively in February. Chinese car sales are expected to grow by 9% or more in 2012.

Have no illusions…Detroit isn’t back, but Beijing, Chongqing and a bunch of other cities most Americans can’t pronounce sure as hell are.

The trade deficit is just one of the signs. Now is precisely the time to invest in China.