Odds are, by this time next month the S&P 500 will be sharply lower.

[ad#Google Adsense 336×280-IA]Stocks have somehow managed to shrug off European debt concerns, ignore a host of negative technical indicators, and continue to defy gravity by marching even higher.

So it seems silly to keep harping on how vulnerable the market is to a swift and severe correction.

Frankly, I’m growing tired of washing the egg off my face every morning…

Nonetheless, there are good and bad times to buy into the stock market.

Since the S&P 500 is already up about 11% so far this year, and we have new caution signs popping up every day, I’m willing to go out on a limb and suggest that now is a bad time to buy stocks.

Wednesday, the S&P 500 did something it only does once or twice each year. The index closed above its upper Bollinger Band. Take a look… 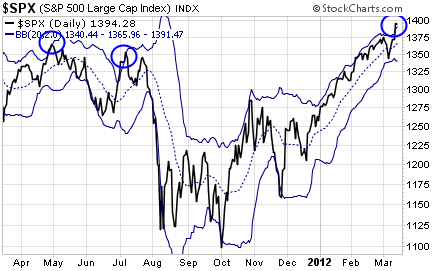 Bollinger Bands help define the most probable trading range for a security. Any move outside of the Bands indicates an extreme move – one that is too extended and likely to reverse direction.

So Wednesday’s close above the upper Band is yet another warning sign that the broad stock market is vulnerable to a correction.

We saw something similar in 2010 as well… 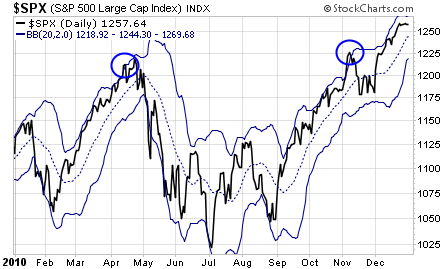 Heck, even in 2009 – the year of the first quantitative easing-induced stock-buying binge – the market dropped 5% just a few weeks after the S&P 500 closed above its upper Bollinger Band in June.

You can go back every year for the past decade and find evidence to prove the same point. Stocks are overextended… and they’re vulnerable to a swift and severe correction.

Of course, I can’t tell you when the pullback will finally start. I thought it would have started by now. But I certainly don’t recommend buying stocks aggressively right here. They’ll likely be cheaper sometime in the next few weeks.

Keep in mind one of Wall Street’s oldest sayings… “Buy low and sell high.” Which one do you think you ought to be doing today?

With the S&P 500 rallying above its upper Bollinger Band… I’m a seller.