On March 1, you probably missed one of the most important pieces of investment news so far this year…

This was just before the market began its three-day, 2.2% “hiccup.”

And most traders were so worried about seeing their volatile, low-quality stocks sink in price, they didn’t even notice how a small group of investors received a 9% raise.

[ad#Google Adsense 336×280-IA]While the “herd” was in a lather, this group was sleeping well at night… knowing its income was about to take another big step higher… just like it’s done every year for 38 years.

This group is known as “owners of Wal-Mart common stock.”

You can see the relentless rise in the chart below. It shows Wal-Mart’s quarterly dividend payouts for the past 10 years: 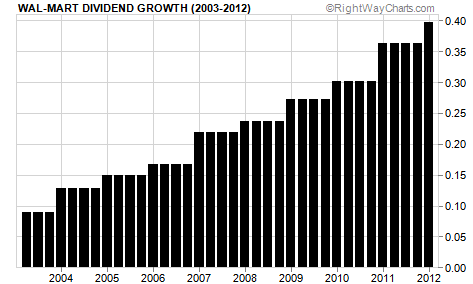 Over the past five years, Wal-Mart hasn’t paid out less than 30% of its earnings in dividends. So it could double the current dividend and still have more room to grow it.

But you might think Wal-Mart’s current dividend yield of 2.6% means this news isn’t worth your time.

For one thing, the same qualities that have allowed the company to increase its dividend every year for decades – the steady, cash-gushing nature of Wal-Mart’s business – means it’s much less vulnerable to broad market drops than your typical stock.

You can see that quality at work in its August performance. While the benchmark S&P 500 stock index lost 17% of its value, Wal-Mart fell less than 10%… and had fully recovered by early October. The S&P took another four months.

For another thing, the safe, growing dividend acts as a “magnet” to pull the share price higher. And it’s really been kicking in lately. My colleague Brian Hunt pointed this out in a recent issue of his Market Notes…

Our guess is that in 2012, more and more people recognize the safety and income-producing power of basic dividend payers. With interest rates low, the fashionable thing on Wall Street will be for fund managers to say, “I own blue-chip dividend payers.”

This will send a flood of new money into these stocks. Corporate managers will see the share prices of divided payers rise… so they will hike payouts. This will create a “momentum” trade in dividends.

Over the last six months, Wal-Mart’s shares are up 27%. This says some people are starting to acknowledge the importance of Wal-Mart’s excellent near-term and long-term dividend growth potential. But the “hop-hum” reaction to Wal-Mart’s recent announcement tells me the crowd hasn’t woken up to this idea… yet.

You can “wake up” right now, though. If you’re done fretting whenever the market takes a hit… if you want to sleep well at night no matter what the market does… if you want to see your income rise every year… relentless dividend-raisers like Wal-Mart are the kind of stocks you need to own.

Sponsored Link: Dan Ferris writes our income-focused advisory, The 12% Letter. His strategy of selecting only the strongest dividend-payers in the world has brought his readers 15 safe, double-digit winners in the last two years. To learn more about The 12% Letter, click here.