“Hey Steve, I’ve got to apologize to you,” he told me. “I gave a speech this morning to the World Affairs Council. I told them about your ‘Next Switzerland’ idea. But I forgot to attribute you. Sorry about that!”

I told him, “No worries, Frank. I’m glad to get the word out on one of the world’s last ‘safe havens'”…

For decades, investors put their money in Switzerland’s currency, for safety.

[ad#Google Adsense 336×280-IA]Switzerland’s currency used to be considered the world’s strongest, with a significant gold backing.

But in recent years, Switzerland has been selling its gold.

And last year, Switzerland announced it would purposely weaken its currency… It promised to print as much money necessary to weaken the Swiss franc versus the euro. 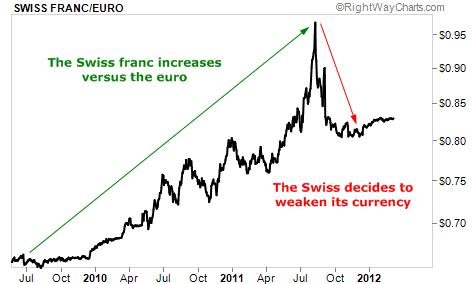 In short, by selling its gold and purposely weakening its currency, Switzerland ain’t what it used to be as a safe haven – at least as a place to put your cash.

So if not Switzerland, where can you put your money to keep it safe going forward? Where will your money be treated well? Where can you earn a decent interest rate, in a country that isn’t going broke?

Today, I think of Australia has the potential to be the “Next Switzerland.”

The situation in Australia today shares a lot of similarities with what caused Switzerland’s currency to soar:

A lot of that sounds like Switzerland of old to me!

These high short-term interest rates are expected to hang around in Australia through 2013, as Australia remains committed to preventing inflation (just the opposite of the U.S. and Europe).

I believe it’s possible the Australian dollar could “settle in” at ridiculously overvalued levels for the very long term… just like the Swiss franc did for decades.

I’m talking about a level much higher than today – a level that makes no sense to academics… but makes sense to safety-seeking investors.

The one risk here is that the Australian dollar is highly correlated to commodity prices. But the Australian government is in better shape to handle a crisis than any country in the world.

The typical government “tools” to fight back a crisis are to 1) borrow money and 2) cut interest rates. With no real debt and a high deposit rate, Australia has plenty of room to do both of these today to fend off any crisis.

For the long run, Australia’s dollar is safe. It might just be the last safe country on earth for your money.

If it does take on “safe haven” status – as sort of a Next Switzerland – the Australian dollar could soar higher than anyone can imagine right now. It’s time to be invested in Aussie dollars for the long run, earning more interest than you can in the U.S. – and safely, too.

The simplest way for Americans to own Aussie dollars is through the CurrencyShares Australian Dollar Trust (FXA). It’s an exchange-traded fund you can buy through any U.S. broker. It currently pays a 3.75% dividend.

You can contact EverBank’s World Markets department to find out about these things. Call 800-926-4922 or e-mail WorldMarkets@Everbank.com. (As always, I don’t receive any commission or any other compensation from EverBank, and neither does my publisher, Stansberry & Associates.)

It could turn out to be the Next Switzerland – the next great safe place for your cash.