If you think we’re running out of oil, you’re wrong…

I just got back from this year’s giant North American Petroleum Expo (NAPE) in Houston, where all the talk was new oil production coming online.

Some commentators won’t buy it. But there’s an oil boom going on right here in the U.S.

The boom is coming from new drilling in shale rock. Shale is made up of flat layers, like pages of a book. The good ones are full of organic material that becomes oil and gas.

A decade ago, no one believed you could economically extract energy resources from shale rock. But new technologies (like horizontal drilling and hydraulic fracturing) have allowed us to tap vast new resources. Back in 2000, it was all about natural gas shales. Today, it’s all about oil.

[ad#Google Adsense 336×280-IA]The great thing about these new oil wells is how low-risk they are.

These are rocks that are all well-known.

We’ve been drilling through them for decades.

They’re right here in the U.S.

This isn’t like drilling miles below the ocean. And it’s not like exploring in some unstable African dictatorship. That means there’s no political or exploration risk.

Take the Bakken shale for example. The Bakken is huge. It underlies about 200,000 square miles of North Dakota, Montana, and Saskatchewan. It holds about 400 billion barrels of oil. We know where the oil is… Until recently, it just refused to come out.

However, engineers cracked the code, and now we’re pumping over 114 million barrels per year out. Oil production in the Bakken is up 310% in just six years. Bakken oil makes up nearly 8% of U.S. oil production today. 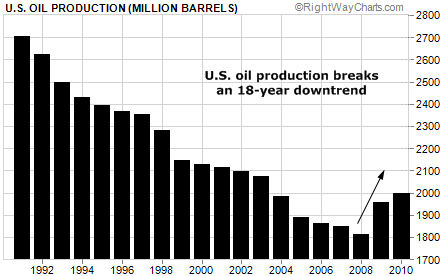 We saw something just like this in the early 2000s with natural gas shales… And early investors in natural gas shale producers made a fortune. Companies like Ultra Petroleum, Range Resources, and Pioneer Natural Resources soared thousands of percent from 2000 to today.

I think the same could happen with companies drilling for shale oil.

I’m looking at oil producers with big land positions in “oily” shales like the Utica shale (in the northeastern U.S.), the Granite Wash (in Texas), and the Tuscaloosa Marine shale (in Louisiana and Mississippi).

These include companies like Chesapeake Energy (CHK), Carrizo (CRZO), and Linn Energy (LINE).