It sounds crazy, but the income you collect in the stock market could soar by at least 50% in the coming years…

And this income boom could cause share prices to boom as well.

Last year, S&P 500 companies paid $256 billion in dividends. That’s a huge amount of money. But it’s nothing compared to what the companies COULD pay. The payout could increase by 25%… 50%… or even 62% in the coming years.

Right now, the S&P 500 only pays 29% of its earnings in dividends. That’s near an all-time low. Its long-term average payout is 47%. That means most S&P 500 companies could massively increase their dividends. 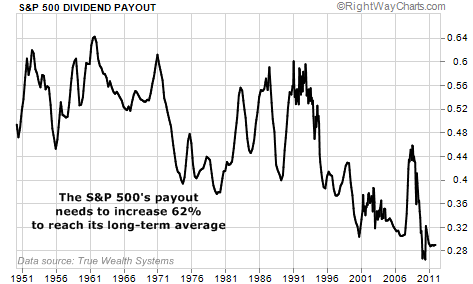 Why are we seeing this record-low “payout ratio”?

[ad#Google Adsense 336×280-IA]Many corporate managers are scared of another 2008… when the economy cratered and it was hard to borrow money. These corporate managers are worried about things like U.S. government debt and the European financial crisis. Keeping lots of cash on hand – instead of paying it out to shareholders – provides a “buffer” against trouble.

But if the world simply “doesn’t end,” the economy will slowly get better… and big companies like Coca-Cola, Cisco, Disney, and ExxonMobil will keep churning out steady cash flows… which will allow them to pay more dividends.

If the company increased its payout percentage to its historical average (50%), and the stock price stayed the same, Exxon would be yielding an impressive 4.9%. Of course, if Exxon’s dividend started rising that fast, investors would “chase” the yield and push shares higher.

Is Exxon going to increase its dividend? I don’t know. It certainly could. The thing is… Exxon isn’t the only company with historically low payouts.

Take biotech giant Amgen… By paying out 47% of its earnings, Amgen would increase its dividend yield to 4.1%. Disney’s current yield is 1.5%. If it paid out 47% of earnings, that yield would more than double to 3.4%.

A couple big tech companies in the S&P 500, like Google and Apple, pay no dividends at all right now. Cisco and Oracle have small yields (around 1%). All of these companies have multibillion-dollar cash piles (nearly $100 billion in Apple’s case). Sure, they need some of that money to invest in future growth, but they could start returning a lot of that money to shareholders.

As my Editor in Chief, Brian Hunt, recently pointed out… investors are growing more and more interested in collecting dividends from large, super-safe companies, like Wal-Mart and Intel. Both Wal-Mart and Intel are relentless dividend-payers… And they have surged in the past four months.

Don’t think other corporations haven’t noticed this budding trend. They want their share prices to rise as well… so they will likely increase their payouts from historic lows. Investors collecting $1 per share in dividends from their favorite blue chip today could be collecting $1.25 or $1.50 per share in just a year or two. With interest rates so low, investors will flock toward these stocks.

In sum, many S&P 500 companies are flush with cash. Standard & Poor’s (S&P) recently reported that cash levels as a percentage of market capitalization are the highest they’ve been since 1988. Interest rates are at record lows. And income-seeking investors could pile into stocks should dividends rise from their historically low levels.

This is a big bullish case to own stocks in general… and dividend stocks in particular.