[Editor’s note: Today, we’re wrapping up our “how to guide” for resource investors. We’ve shown you how to master the sector’s booms and busts, the tools you need to make the proper trade, and how to maximize your returns and reduce your risk. Now, we’re going to step back, take a look at the big picture, and explain…]

Becoming a rich investor is all about making the numbers work.

[ad#Google Adsense 336×280-IA]As an investor in natural resources, it’s important you know there’s one big number out there working for you, every day.

I call it the “China Number.” And it is the most important number in all of natural resources.

This is the amount, in U.S. dollars, of China’s per-capita GDP, according to the CIA’s World Factbook. (Other organizations, like the International Monetary Fund and the World Bank, have similar numbers.)

“Per capita GDP” is the value of all the goods and services produced in a country during a given year divided by the country’s population. It is one of the best yardsticks for measuring a nation’s wealth.

According to the CIA’s posted numbers, China’s per-capita GDP is $7,600… which makes China the world’s 126th-richest country per capita.

Here’s why that number is so important…

Sweden, Austria, Iceland, Canada, and the Netherlands are all at least five times richer than China, measured by per-capita GDP. Chile, Lithuania, Croatia, Estonia, Puerto Rico, and Hungary are all more than twice as rich as China.

China’s relatively low level of economic prosperity is so important to resource investors because China is the most populous country in the world. Some 1.3 billion people live there… more than twice the amount of people living in the countries I just mentioned combined.

It earned that title because for the past decade, it has been the world’s fastest growing major economy. According to the CIA World Factbook, China has grown at an average of 9% per year since 2003. This is a breakneck growth rate for a large economy.

But remember… this rapidly growing superpower with three times the population of the United States is still dirt-poor relative to the developed world. China could double its per-person wealth, and it would still be less than half as wealthy per person as the United States.

The potential here is enormous.

And it’s going to take a mountain of commodities to build it all.

In 1998, China’s copper imports were negligible. But these days, it can’t meet demand with domestic supplies. Its imports are skyrocketing. 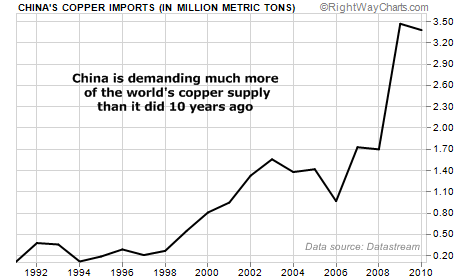 I could show you similar charts for iron ore, natural gas, coal, and many other commodities. All would show how China’s consumption is booming.

Again, remember that despite all of this growth, despite its position as the No. 2 economy on a total production basis, and all of this natural resource consumption, China is less than one-fifth as wealthy as the United States, measured by per-person wealth.

Don’t think the Chinese are happy about their low level of economic prosperity.

Over the past 30 centuries, China was either the largest or the second-largest economy for 28 of them. China has a long and proud tradition of economic progress and innovation. China invented papermaking, printing, gunpowder, and the compass.

But things took a turn in the 1800s. Brutal political struggles and a series of military defeats at the hands of Europe sent the country into chaos. Japan took the opportunity to kick its neighbor while it was down in the late 1800s and early 1900s. It murdered and pillaged its way around China for decades. World War II brought more death and disaster… and so did a bout with crazy communist policies for much of the 20th century.

But starting around 1980, the sleeping dragon woke up. A man named Deng Xiaoping became China’s leader. Deng spearheaded economic reforms and turned the busted communist ship around. He encouraged the Chinese to work hard and become rich. He freed up the economy and allowed citizens to enjoy the fruits of their labor.

What followed was one of the greatest economic booms in history.

China has gone from a land of misery and collectivism dominated by foreign powers to reassert itself as one of the most dynamic, powerful nations on earth. And as the Chinese read, see, and hear about how wealthy industrialized nations like the U.S. and Germany have become, they are working furiously to play catch up. They want the good life and the prestige that the West enjoys.

Another big factor that will influence commodity prices over the next few decades is the modernization of India. Like China, India has more than 1 billion people. And while it has become a much more advanced nation in the past 20 years, it’s still extremely poor on a per-person basis. It’s less than half as wealthy as China… and less than one-tenth as wealthy as the United States. Like China, India has a tremendous amount of “catch up” to play… and will consume an enormous amount of metals and energy in the next few decades.

Legendary investor Jim Rogers has seen China up close… and he’s always pointing out how the Chinese are more hard working and better capitalists than U.S. citizens.

The country’s rise is just beginning. China is still poor compared to the rest of the world. And while it is consuming awesome amounts of resources right now, that consumption is a fraction of what it will become…

Please keep in mind… I’m not saying, “The world is running out of resources!” I’m not worried about the world going through a huge crisis because some key resource is depleted. Prices will simply rise to reflect the supply/demand situation… and folks around the world will find substitutes for a raw material that gets very expensive. Plus, we’ll continue to find more efficient ways to use raw materials.

But the entrance of China into the modern, global economy means prices will have super-strong buying support over the coming years. That’s why, when periodic selloffs make resources cheap, it’s a great idea to buy with both hands.

Sponsored Link: Matt Badiali is the editor of the S&A Resource Report. In the last year, Matt has closed 20 winning positions… five of which earned subscribers triple-digit gains. To access this service – and learn about one of the most bizarre resource ideas Matt has ever discovered – click here.