It sure is. Just not yet…

It is true that the U.S. government is on an unsustainable path of spending. We’re fast approaching the point where it can only end badly.

But before you go build your bunker and fill it with freeze-dried food, know that you have a couple years…

[ad#Google Adsense 336×280-IA]Based on history, we’re not there yet. Right now, there’s no recession looming.

At least, that’s the conclusion of two of the best indicators at predicting recessions.

I’ll share these two indicators with you today. Their historical track records are very good. And they point to “clear skies ahead” for the time being.

The first indicator I’ll share has a great track record as an “early warning” sign for recessions… This indicator has predicted every recession over the last 40 years.

When the black line dips below the red line, recession typically follows within a year or two. Recessions are highlighted in gray. Take a look: 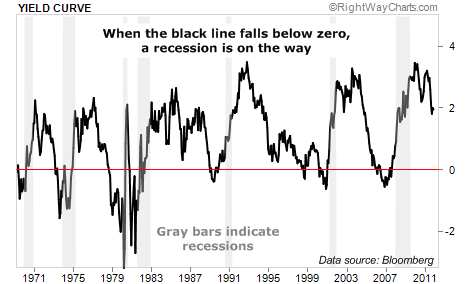 Importantly, right now, this indicator is nowhere near a level that predicts a recession. Based on this indicator, recession is a few years away… at the earliest.

Over the last 40 years, whenever the government has raised interest rates to an unnatural level above long-term rates, it has typically “killed” the economy – causing recession. Crazy, but true. We’re not there yet on this indicator… The government hasn’t gone down this economy-killing path, yet. 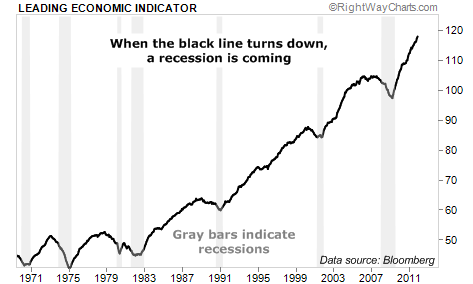 When I see this chart, I see two things…

First, you can see that each recession over the last 40 years was predicted by a clear move lower in this line. It typically gave us a decent “lead” time.

Second, you can see that this line is decisively pointing “up” right now.

The conclusion based on this indicator is there’s no recession looming now… and it might be a few years before one kicks in.

This indicator is the “Leading Economic Indicator.” It’s published by the Conference Board, a nonprofit research organization. The indicator is built from 10 “early warning” statistics, primarily about the health of American business. (It includes thrilling data like “the index of supplier deliveries,” “manufacturers’ new orders,” and such.)

Over the last 40 years, the two indicators I showed you today have reliably predicted coming recessions, with decent lead time.

Right now, neither of these indicators is predicting recession.

The long-run future of America is certainly in doubt. But the short run – based on these two simple-but-proven indicators – doesn’t look as bad as everyone says…

Hopefully that’s some good news for the holidays for you.

The Odds That Stocks Will Rise in 2023 Keep Getting Better

The Bulls Have Gained Control of This $1 Stock

Upgrades and Downgrades for Friday, 1/27