I believe gold hit a bottom last week, and I believe it will enter a multi-month rally starting now.

I also believe that the U.S. dollar hit a near-term peak this week, and I believe it will enter a multi-month downtrend, starting now.

[ad#Google Adsense 336×280-IA]Right now, relative to other currencies, I believe the dollar has peaked in the short run.

I believe other currencies will rise against it (as will other speculative assets, like tech stocks and gold stocks) particularly over the next two months.

If I were a short-term trader, I would consider shorting the U.S. dollar index right now, for a couple-month trade.

You see, investor sentiment about the dollar just hit an extreme. And when extremes like this are hit, they’re usually good for a nice move over two months’ time.

One way to show this extreme in investor sentiment is through the “commitment of traders” report. Right now, large speculators are betting against the euro – more than ever in the history of the euro, with the exception of 2010… 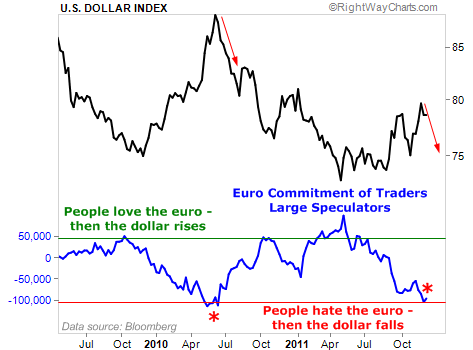 And that’s what happened… Once a record number of bets against the euro had been placed, the euro soared and the dollar crashed.

We’re in the same position today…

Large speculators are betting against the euro in near-record size. We’re set up for a repeat of what happened in mid-2010 – a big fall in the U.S. dollar.

So how can you trade it?

You could buy a bearish dollar fund, which would rise as the dollar falls. PowerShares offers one with the symbol UDN. But the potential rewards are pretty darn unexciting for a two-month trade.

Another way to trade it is to buy a double-long euro fund… ProShares offers one with the symbol ULE. (Don’t think of this as buying euros. Think of this as betting against the dollar for two months.)

Ideally, you want to have three times the upside potential for the risk you’re taking. So a simple way to trade this would be to use a 5% trailing stop and take profits once you’re up 15%. No matter what, close the trade out after two months.

You can take on much more risk if you’d like… through options, for example. But if you want to do that, I’d recommend waiting for some confirmation of the uptrend I expect before buying.

We never have any guarantees, of course. But it sure feels like a near-term top in the dollar.

If you’re looking to roll the dice for a month or two, with limited downside, consider getting short the dollar.