Today, I’m going to show you precisely why stocks have been a terrible investment (in general) over the last decade. Once you understand one certain factor in the value of stocks, I promise you’ll never invest the same way again.

The following chart shows you the price-to-book ratio of the S&P 500 over the last decade. For those of you who are new to finance… that’s probably just a bunch of gibberish. So let me decode it for you…

The S&P 500 is a list of stocks published by the credit-ratings agency Standard & Poor’s (S&P). It is essentially the 500 largest and most successful companies in the United States. This list of stocks is also commonly used as a shorthand way to reference the entire stock market. It’s comprised of stocks from every sector of the marketplace and is thus representative of stocks as a whole.

[ad#Google Adsense 336×280-IA]The book-value ratio is even easier to understand. Book value is one simple measure of a company’s net assets. It’s not a perfect measure, not by a long shot. But used across a huge index of stocks, it’s fine for making comparisons across time. The book-value ratio simply refers to the ratio of dividing a stock’s total stock market value (the total value of all of its shares) by its book value.

This measure gives you a rough idea of whether stocks are expensive (overpriced relative to their assets) or cheap (and thus attractive for investors). The lower the book-value ratio, the better the value. As you can see on the chart below, the average book value of the S&P 500 has gone from nearly five to around two. 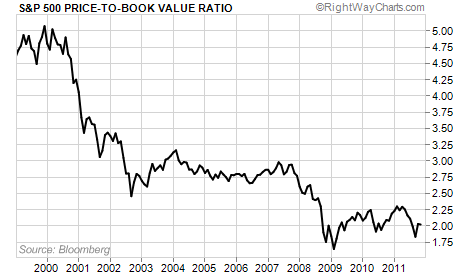 In the above chart, you can see that stocks were extremely expensive back in 2000. And they’ve been getting cheaper and cheaper ever since. You could make the same kind of chart using an earnings-per-share ratio or even a cash-flow ratio. The charts would all look basically the same. Most investors didn’t realize back in the late 1990s and early 2000s that U.S. stocks were trading at multiples of net assets and earnings that the world had never seen before. That is, relative to the underlying assets and the annual earnings, stocks were more expensive than they’d ever been before… ever. So why is that important now?

Most investors have lost money in stocks over the last decade because they’ve been holding stocks that, on average, have been getting cheaper and cheaper relative to the underlying intrinsic value of the businesses they represent. Take Wal-Mart, as one example…

In 2000, shares of Wal-Mart peaked at $70 per share, when it was trading for more than 50 times earnings. Since that time, the share price has basically gone nowhere. (Today, the shares trade for a little less than $60.) Meanwhile, the value of the underlying business has soared. Last year alone, Wal-Mart produced $23 billion in cash earnings, bought back $14 billion in stock, and paid out more than $4 billion in cash dividends. If Wal-Mart still traded at a 50x multiple, the company would be worth nearly $1 trillion today, instead of “only” $200 billion.

What should matter to investors – how much the company is capable of earning and distributing in dividends – rarely does. That’s why you have a great opportunity today to buy super-high-quality stocks, like Wal-Mart. However, let me caution you… I don’t think people, by and large, are going to do well in stocks until the market’s average multiple begins increasing again.

That is, until investors become willing to pay a higher price for stocks, the returns on a portfolio of stocks is likely to be marginal and probably not worth the risk. That’s why I’ve been urging subscribers to think about high-yield bonds. And why I’ve told people that unless they’re able and willing to speculate and hedge, they shouldn’t even own stocks at all.

Instead, since March 2010, I’ve been telling most investors to simply hold 50% of their investing portfolio in gold and 50% in short-term Treasurys. The chart below compares the total return of the S&P 500 to the hypothetical return of a portfolio made up of 50% gold and 50% short-term Treasury bills (as represented here by the SHY ETF – a mutual fund that owns one- to three-year-duration Treasury bills). The black line (the underperforming line) is the S&P 500 – our proxy for stocks in general. 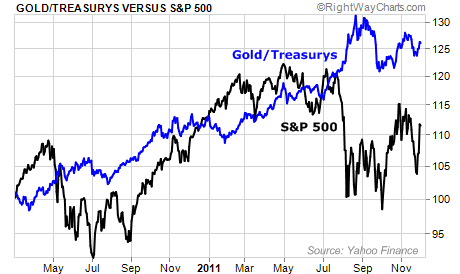 Investors have been unwilling to pay up for stocks for one good and simple reason: They don’t trust the current monetary system, which has suffered crisis after crisis. Investors have no way to know what’s going to happen next in the world economy because the monetary system itself is so fragile right now. As a result, they’re extremely reluctant to pay up for future earnings.

The stock market’s average multiple – how much people are willing to pay for stocks – is a measure of investor confidence. Confidence keeps falling because the fundamentals keep getting worse. More European countries are at risk of default. America continues to run enormous, $1 trillion-plus annual deficits. Central banks around the world have begun to flee the U.S. dollar standard, turning to gold instead. There’s a profound lack of confidence in America’s current political leadership (on both sides of the aisle) to do anything meaningful to improve business conditions. Most investors seem to be waiting for the next shoe to drop. As you know, my position is that they are smart to worry.

The situation leaves most investors in a terrible position. They can’t earn a good return in stocks because of the volatility and the gradual, but continuing, decline in the market’s average multiple. The result is, even when earnings go up, stock prices don’t. Most bond yields are too low to live on. And most stock dividends are, too. If you’re not earning capital gains and you’re not making good income from coupons and dividends… what can you do?

The unfortunate reality is that in a crisis (and yes, we’re in one), the best you should realistically hope to do is protect what you have. That’s why I’ve been advocating gold/Treasury bills. We’ve done well – better than I expected – with this strategy. This is the best way to stay “liquid,” so that you’ll keep your purchasing power and have ready cash to invest when this crisis reaches its final, massive, liquidating panic.

Note from Daily Trade Alert: Per Porter’s recommendation back in March, you can get the equivalent of a “cash” position by using gold to hedge your dollar exposure and by using short-term Treasurys to mitigate the volatility of gold. The Barclay’s iShares 1-3 Year Treasury ETF (NYSE: SHY) is an easy way to own short-term Treasurys. And SPDR Gold Shares (NYSE: GLD) is the most liquid gold ETF.