In yesterday’s essay, I showed you how we are in the midst of a massive, global discovery phase for oil and gas… a phase that will create tremendous wealth for investors.

As I’ll show you today, two things in particular will make this new phase of discovery so powerful.

First, thanks to seismic technology and a better understanding of geology, finding the source rock for these new oil and gas reservoirs is relatively easy. These are colossal layers of rock that cover hundreds of miles. They’re fairly thick, too. As a result, drillers hit very few dry holes – almost none.

[ad#Google Adsense 336×280-IA]Thus, the expansion of these fields is much more of an engineering project than a conventional oil and gas discovery. The companies know exactly where the rock is. They know, more or less, what’s in it. The game is played based on how well you can get it out. And that means spending a lot more money per well. But it also means much lower capital costs because lending money for an engineering project is a lot less risky for banks and investors than lending money for wildcatting.

And secondly… most of the world’s best shale resources are located in North America. These new fields, believe it or not, position us to become a global exporter of energy – and probably the world’s largest exporter.

Trust me, I know how difficult that must be to believe. But that’s how huge these new discoveries are going to be. Most of the world’s energy infrastructure is designed to bring energy into the U.S., not take it out. That’s why for the first time in my life, major infrastructure projects are underway that will allow U.S. companies to export both LNG (liquefied natural gas) and crude oil.

The first tiny wave of this new production has already turned the global energy markets upside down, with the huge (30%) discrepancies between global oil (Brent crude) and domestic oil (WTI) prices. For several decades, the prices of WTI and Brent have been within $3 per barrel of each other… but now, domestic oil is much cheaper than global oil.

To profit from this price differential, several companies are angling to own key elements of the U.S. export supply chain.

Energy infrastructure firm Enbridge bought 50% of the Gulf Coast Seaway pipeline last month from ConocoPhillips for $1.15 billion. The other 50% owner of the pipeline, Enterprise Products Partners, and Enbridge plan to reverse the pipeline’s flow. You see, this pipeline was built to move supplies of imported crude oil north from coastal ports to the heart of the U.S. pipeline network in Cushing, Oklahoma. Now, it’s going to be used to take oil south, out of the U.S. domestic market.

It’s not the only pipeline that’s going to be necessary, either. The same two companies, Enbridge and Enterprise Products, are building “Wrangler” – another Cushing-to-Gulf pipeline with 800,000 barrels a day of capacity.

Kinder Morgan Energy Partners, which in my opinion is the best-managed energy firm in the country, announced last month it will build – in partnership with liquid products transport and storage firm TransMontaigne Partners – a new $400 million fuel oil export terminal on the Houston Ship Channel. The project will include 52 storage tanks with a 6.6 million barrel capacity. The first phase of the project is expected to be finished by the end of 2013.

Why are these firms committing billions of dollars to improving the infrastructure that’s available for energy exports?

I asked our staff geologist and the editor of our S&A Resource Report, Matt Badiali, to help me depict (using data collected by the U.S. government) the size of the proven, onshore natural gas reserves and the current production of natural gas in the United States.

Something I hope you’ll notice in the chart he created: the trend for reserves began increasing rapidly back in 2000. It’s been increasing at an accelerating pace ever since. The technologies that allow these new reserves to be found and produced are getting better.

Something else to note: Increases to production lagged behind increases to reserves. Obviously, it takes more time to produce the resource than it does to discover it.

One final thing I hope you’ll notice: Neither of these lines is curving downward. That’s because peak oil (the idea the world is running out of oil) is complete nonsense – and it always has been. Natural gas is a hydrocarbon. If we were really running out of hydrocarbons, why would natural gas reserves and production keep increasing at a faster and faster pace? 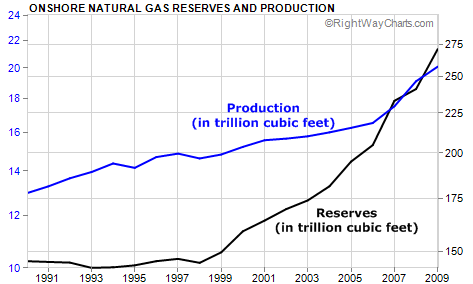 The peak oil fanatics who beat their chests at conferences and claim “we’re running out of oil” would present a different chart, one that shows oil reserves trending down. But they’re using figures that don’t include the size of the reserves that are sitting in the new shale discoveries. You don’t see them because the government doesn’t count them as “proven” yet, for technical and accounting reasons.

Harold Hamm is the CEO of Continental Resources and the pioneer of the Bakken shale fields. He scoffs at the official U.S. Geological Survey estimate of 4 billion-5 billion barrels of reserves in the Bakken. “No way,” he says. “We estimate that the entire field, fully developed, in Bakken is 24 billion barrels. Bakken is almost twice as big as the oil reserve in Prudhoe Bay, Alaska.”

How does he know? As he says, the more we drill, the more oil we find. “We expect our reserves and our production to triple over the next five years.”

This coming boom in oil discovery and production is why I’m closely watching producers like EOG Resources, Continental Resources, and Range Resources. They have choice acreage in the most promising fields.

When periodic market selloffs make these stocks very cheap, I recommend buying them. I also recommend becoming familiar with companies that own the best shipping and energy pipeline assets. These companies will create enormous wealth for shareholders as the U.S. becomes a giant exporter of oil and gas.

Further Reading: “What’s happening here is bigger than just one or two oil companies having some success,” Porter wrote yesterday. “It’s even bigger than the Eagle Ford play. We are in the midst of a massive, global discovery and expansion phase for oil and gas.” Read the first half of his two-part series here.