DGI Lesson 7: Dividends are Independent from the Market

But those perceptions are not true.

The fact is that dividends and the market are independent from each other.

Indeed, the independence of dividends is one of the reasons to invest in great companies that pay steady, rising dividends: The dividends continue to flow, and they can help cushion the fall when stock prices decline. Some call this “getting paid to wait” for the market to get back on its feet.

There are two sources of return from the stock market:

We all know that the Great Recession (from late 2007 to early 2009) caused a sickening fall in the stock market. It took the prices of most stocks down with it.

Here is what the S&P 500 – probably the most widely used gauge of the stock market – did during the Great Recession. The chart shows the time period from June 2007 to the end of 2009. The gray shaded area is the recession itself. 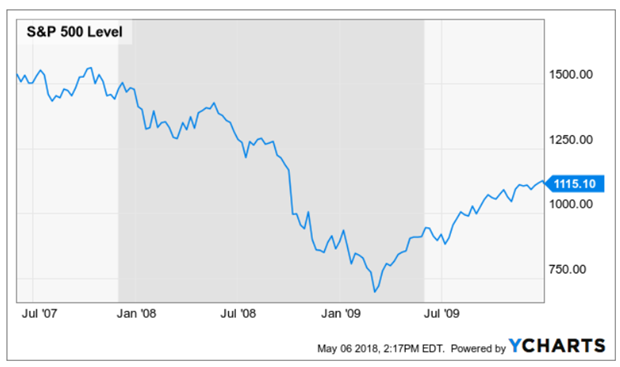 The total price value lost from the index – peak to trough – was about 51% over 17 months. It was a hellish experience for many investors.

Here, for example, is a chart of Johnson & Johnson (JNJ) — a stock that I own — covering the same time period as above. 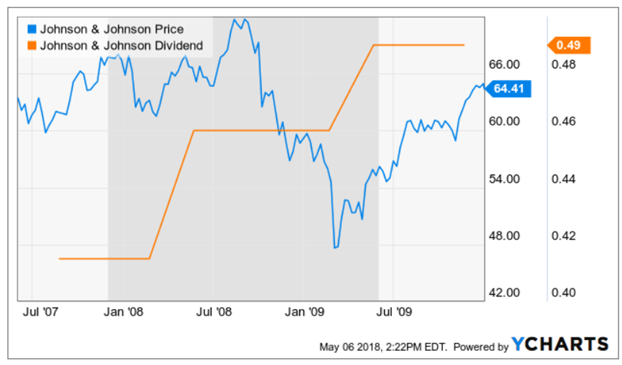 This chart shows both components of total return. JNJ’s price is shown by the blue line, while its dividend is in orange.

Note that the stock price of JNJ plunged during the market crash in 2008, as might be expected.

In a broad bear market, most stocks are pulled down, even high-quality ones like JNJ.

But JNJ’s dividend kept being raised.

Each stair-step in the orange line represents one of JNJ’s annual dividend increases.

There is no break in the string of increases.

Two raises took place during the recession itself.

In fact, Johnson & Johnson has been raising its dividend for 56 years. We know that from David Fish’s Dividend Champions, Contenders, and Challengers.

Here is how JNJ’s record looks over a much longer term. In the following chart, all of the gray bands are recessions. All of the little bumps up in the orange line are JNJ’s dividend increases. 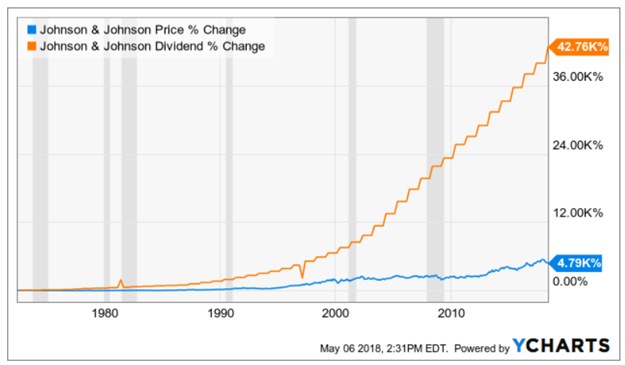 I changed the scale in the 2nd chart to show percentage increases rather than dollar values. JNJ’s dividend has gone up over 42,000% since the early 1970’s. JNJ has kept increasing its dividend through 6 recessions – the gray bands – including the big one in 2007-2009.

There are many other examples I could give that would show the same story. Just picking stocks from my Dividend Growth Portfolio, here are the dividend increase streaks of several widely held dividend growth stocks.

Here are the same 6 stocks graphed to show dividend growth over the past 10 years. Basically they all look the same, the only differences being in rate of growth. 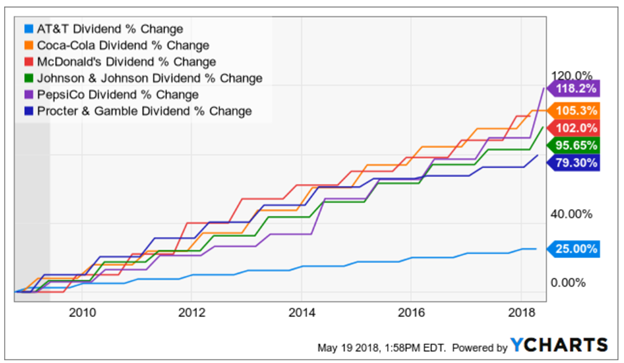 No matter what the market did during the past 10 years, all of the dividend paths were steadily upwards.

Why Are Dividends Independent from the Market?

Remember from DGI Lesson 1 that dividends are cash distributions by a corporation to its owners. The company’s management proposes the payment of a dividend to its board of directors. If the board approves, a public announcement is made, and the dividend is scheduled to be paid.

That’s the process. Read it again. There’s nothing about the market in the process for declaring dividends.

Now it is true that the economy can influence both processes. In a recession, stock prices often go down, and so may corporate revenues and profits. The latter may influence a company to slow down, freeze, or even cut its dividend.

But fundamentally, the systems by which stocks are priced and dividends are declared are separate and distinct from each other. That’s why Johnson & Johnson continued to increase its dividends through the Great Recession even though its price took a hit.

Any company with a dividend increase streak longer than 12 years (as of this writing) increased its dividend during the Great Recession. That includes all of the Champions and a good number of the Contenders.

How Dividend Independence Can Help You as an Investor

One of the findings of Behavioral Economics is that many stock investors hurt themselves by over-reacting to price drops and market volatility. Average investors often underperform the very instruments that they invest in.

That may sound impossible, but it happens because they panic and sell during difficult times, then wait too long to buy back in. Trading in and out quite often lowers returns.

From my own personal experience, dividend growth investing helps keep me away from that kind of behavior. There are several reasons.

First, as a dividend growth investor, I pay far more attention to income amount, growth, and safety than prices. In the JNJ charts shown above, my eyes are on the orange dividend line, not the blue price line.

Third, dividend growth stocks often give you a smoother ride through bear markets. Their price volatility is often less than average. So there are fewer and less severe drops to contemplate. Not only that, the dividends soften the impact of price drops, and the stocks recover faster.

Let’s look at Johnson & Johnson again, comparing its price (without dividends) to the S&P 500 during the Great Recession. I’ve circled the price peaks before the bear market pulled both down. Here, JNJ is in blue, while the S&P 500 is in orange. 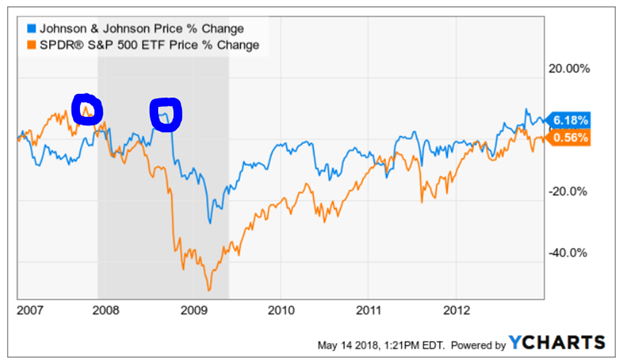 If we look at total return (with dividends accounted for), JNJ’s resilience is even more pronounced: 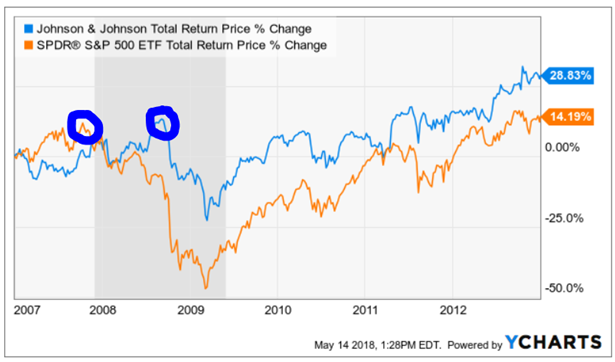 You can see that JNJ’s total returns recovered from the bear market in 2011, much sooner than the S&P 500.

It is factors like these that may help you to stay invested when others are bailing out. In JNJ’s case, its price dropped less, the ride was smoother, it kept increasing its dividend, and it recovered faster.

Many dividend growth investors turn away from price obsession, which means that they begin to ignore the relentless media coverage of prices.

Instead, dividend growth investors turn their focus to income for the long term, sustainable company qualities, and company fundamentals rather than price popularity in the market.

In fact, price drops are often seen as opportunities. In my Valuation Zone series of articles, it is quite common to see that the month’s well-valued stock has recently experienced a price drop. That’s why it’s well-valued and worthy of writing up.

Simply staying the course results in better long-term returns, as the market has always recovered. But that’s hard to do when news outlets are talking about doomsday price scenarios.

Growing dividends – providing that little bit of positive reinforcement each time you receive some cash from your investment – can help you stay the course.

So the next time you read someone equate market slides with dividend slides, or market turbulence with dividend turbulence, think to yourself that you know the facts. It just ain’t so. Dividends are independent from the market.

Key Takeaways from this Lesson

Click here for Lesson 8: How to Build a High-Yielding Dividend Growth Portfolio