In our last lesson, we saw how an annual increase in a company’s dividends causes your dividend income to increase at a growing rate. This is called compounding. It results from the fact that each annual dividend increase builds upon the rate established by the last increase.

Compounding is like a snowball rolling down a hill, picking up new snow. As it rolls, it gets bigger at an increasing rate. Put another way, the bigger it is, the faster it gets bigger.

In dividend growth investing, that snowball effect from increasing dividends is the first layer of compounding.

You can add a second layer of compounding by reinvesting the dividends. Your dividend income, which is growing anyway, grows even faster if you buy more shares with the dividends.

You can reinvest dividend cash into the same stock that issued it, or you can use it to purchase shares of a different stock. Mathematically, it doesn’t matter, because the effect is the same: You will accelerate the rate at which your portfolio’s dividend stream grows.

Reinvesting dividends matches that definition exactly. The cash dividends coming in are “money already earned.” If you use that cash to buy more shares, the new shares will issue their own dividends. Those additional dividends are available only because you reinvested the original dividends.

To review, here are the two layers of compounding in dividend growth investing:

The end result is a growing snowball of dividends and shares that keep getting bigger at an accelerating rate.

We can see the impact of both layers of compounding by viewing a chart of dividend dollars per year that is produced by the calculator at Miller/Howard Investments.

For this simple hypothetical illustration, I input data for a stock that has a 3% yield and grows its dividend 5% every year. The initial investment is $1000. 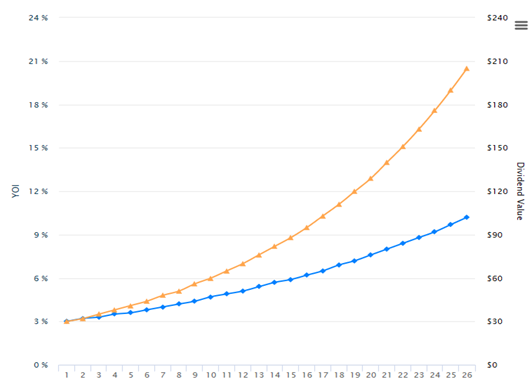 The mathematical measure for compound growth is called compound annual growth rate (CAGR). CAGR is the constant percentage rate of growth that would get you from the beginning point to the end point of a growth curve.

In real life, dividend growth rates vary from year to year. The CAGR pretends that the growth rate was equal every year, to arrive at the same result years later.

The CAGR of the blue line is 5% per year, which is the hypothetical dividend growth rate that I put into the calculator. Without reinvestment, the percentage rate of growth stays constant every year.

I computed the CAGR of the orange line. It is 8% per year. The higher rate is entirely the result of dividends being reinvested. Each reinvestment buys more shares, which generate more dividends. That’s why the orange line curves up and away from the blue line over time.

The analogy of a snowball rolling down a hill applies not only to your dividend stream, but also to how many shares you own. The orange line in the chart below shows how your shares increase when you reinvest dividends. In our simple example, 10 original shares become 30 shares in 25 years.

Without reinvestment, the blue line stays flat – you don’t get any additional shares.

Remember again why the orange line moves up and away. You didn’t add any new money to the portfolio to get those extra shares. The stocks you already own provided the money. The new shares came solely from reinvesting dividends that the portfolio produced on its own.

One of the most common dividend growth stocks is Johnson & Johnson (JNJ). JNJ has been increasing its dividend for 55 years. We’ll look at the last 11 full years (2007-2017).

Examining a real stock introduces real-world variability into the theoretical inputs that I used to generate the graphs earlier. Instead of a constant rate of dividend growth, we get the variable rate that the company actually provided. The shares purchased with reinvested dividends will come at the stock’s actual price, not a theoretical price.

Nevertheless, the principles still apply. On this graph of Johnson and Johnson, covering 2007-2017, we see JNJ’s real price (the black line) and its trajectory of dividend growth (the white/green line). 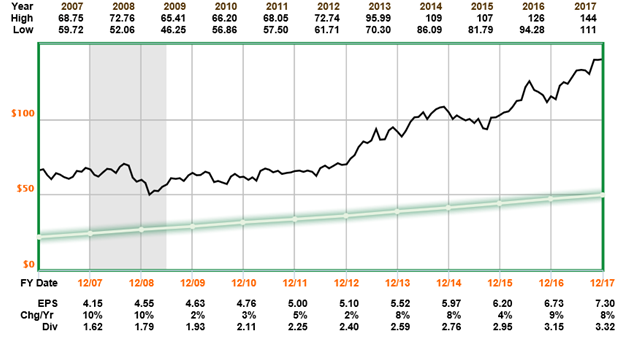 It’s hard to see, but the dividend line is curving upward slightly. That’s the result of JNJ’s dividend increases each year.

The following display shows how JNJ’s dividend, if reinvested in JNJ’s own shares, caused the dividend income stream to accelerate. This isn’t hypothetical, it actually happened. The figures are based on a $10,000 investment in JNJ. I’ve marked the display to identify the important points to notice.

What if the dividends had not been reinvested? The number of shares would have stayed flat and the income stream would not be nearly as large.

The results absent reinvestment are nothing to sneeze at. Annual dividends more than doubled. That’s from the first layer of compounding: The impact of the company raising its dividend every year.

Reinvesting dividends added the second layer of compounding. In 11 years, the annual dividend flow nearly tripled, as did the yield on cost.

If the table were extended another 10 years into the future, the rate of pick-up of additional shares and the speed at which the dividend stream grows would continue to accelerate. Fortunes have been built in exactly this way.

Important Takeaways from This Lesson

Click here for Lesson 6: Yield and Yield on Cost