DGI Lesson 4: The Power of Compounding

Compounding is one of the most powerful concepts in investing. Compounding occurs when your money grows at a geometric (exponential) rate rather than a linear rate. 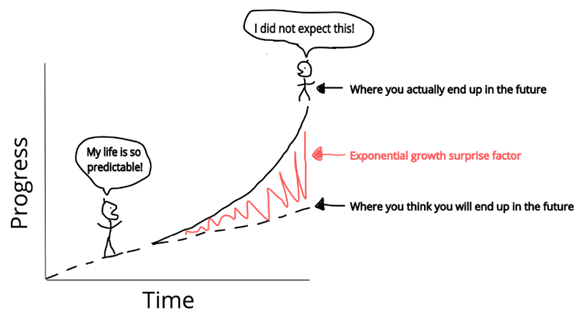 Compounding is especially interesting in dividend growth investing, because it happens at two levels.

This lesson is a primer on compounding and also addresses the first bullet point above. Lesson 5 will focus on the second bullet point.

Great companies compound money within their businesses. They earn money, then take some of the money already earned (“retained earnings”) and invest it back into the company to fuel growth.

If the growing company is one that pays dividends, its growth also allows it to increase its dividends.

That means that growth occurs not in a straight line, but in a line that curves upward, as shown in the cartoon above.

When applied to dividends, this annual rate of increase is called the dividend growth rate (DGR).

The difference between straight-line growth and compound growth is startling. Do you remember the childhood brain-teaser about your father giving you a penny allowance on the first day of the month and then doubling the amount each day? Most kids think that’s nothing special.

But they’re wrong. If you double a penny for 30 straight days, the amount your father owes you on the 31st is more than $10 million dollars!

Let’s relate these principles to dividend growth investing with a simple hypothetical example.

Say that a successful company raises its dividend by 10% per year. In the first year, its dividend is $10.00 per share per year. Let’s see how it grows when it’s compounded by a DGR of 10% per year for 10 years. Look at the blue columns in the following table.

The table show how powerful compounding is. In 10 years, the dividend increases to almost 2.6 times the amount of the first year’s dividend.

At first, this might seem impossible. After all, each year’s increase was just 10%. If you add up 10 years’ worth of 10% increases, shouldn’t that give you a 100% total increase? Shouldn’t the amount after 10 years be 2.0 times the beginning amount?

No! The reason that the amount after 10 years is way more than twice as much is the result of compounding. Each year’s 10% increase was tacked onto the prior year’s amount. That means that each year’s increase is more – in dollars and cents – than the year before.

Compounding is like a snowball rolling down a hill: The bigger it gets, the faster it gets bigger.

For comparison, in the red column, we show the same dividend increasing by a constant amount of $1.00 per year. That represents straight-line growth. It matches the intuitive result of 100% total increase. In the 10th year, you receive twice the amount as in the first year.

By the end of the 10 years shown in the table, the annual dividend with compounded growth has far surpassed the dividend being raised by a constant amount each year. 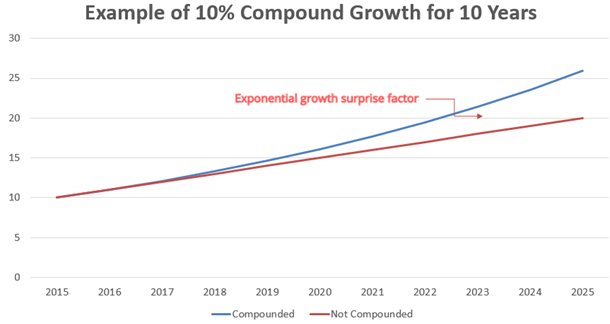 The first year’s dividends are the same, but by 2025, the compounded dividend is 30% more. The compounding line curves upward, while the non-compounding growth stays straight.

The most common mathematical measure to describe compound growth is compound annual growth rate (CAGR). The CAGR for the table is 10% per year. When you are talking specifically about dividends, the term (as noted earlier) is called the dividend growth rate (DGR).

Here are a few real examples taken from David Fish’s Dividend Champions, Contenders, and Challengers. The middle column shows each stock’s 10-year DGR. The last two columns illustrate how those DGRs increased the dollar amount of the annual dividend over the 10 years from 2007-2017.

(Disclosure: I own Coca-Cola, Johnson & Johnson, and Lowe’s.)

That said, you will often see a loosely inverse relationship between yield and DGR. In the table above, for example, the lowest-yielding stock – Lowe’s at 1.8% – has had the fastest DGR at 19.3% per year, while higher-yielding stocks have slower dividend growth rates.

Here are the important takeaways from this lesson:

Please note that we haven’t talked yet about reinvesting the dividends. The compounding discussed in this article has been about the impact of the company raising the dividends that it sends you.

Dividend reinvestment gets into the topic of what you do with that cash once you receive it. We’ll talk about that second layer of compounding in the next lesson.

Click here for Lesson 5: The Power of Reinvesting Dividends