Some dividend growth investors believe that a fast-growth stock is “better” than a slower-growing stock.

For example, they would consider Starbucks (SBUX) to be better than AT&T (T), because Starbucks has a much faster rate of dividend growth. Its dividend growth rate over the past 5 years has been more than 24% per year, while AT&T has been plodding along at 2% per year.

They would say that AT&T is better than Starbucks, because it has a much higher yield. Its yield is nearly 7%, making it a true high-yield stock. (Disclosure: I own both stocks.)

But does either characteristic, by itself, make Starbucks or AT&T “better”?

It depends. “Better” is subjective. Whether a high-growth or high-yield stock is better for you depends on a multitude of factors, including your goals, age, and situation in life.

To get started, let’s look at the math. Here is the tale of the tape for these two stocks. You can see that they are different breeds of DG stocks.

In evaluating stocks, sometimes it can be tempting to gloss over yield in favor of dividend growth rate, or vice versa. But to decide what’s “better,” you have to look at both metrics, particularly how they play out over time.

These two stocks provide stark examples of the extremes. Starbucks is a low-yield, fast-DGR stock. AT&T is the opposite: High-yield, slow-DGR.

Here’s the key: Both yield and DGR impact how many dollars you receive over time from each stock.

To illustrate the interplay between yield and dividend growth rate, I like to use the calculator at Miller/Howard Investments. Let’s plug Starbucks’ and AT&T’s stats into the calculator and see what we get.

Here is Starbucks, showing scenarios both with (orange) and without (blue) dividends being reinvested: 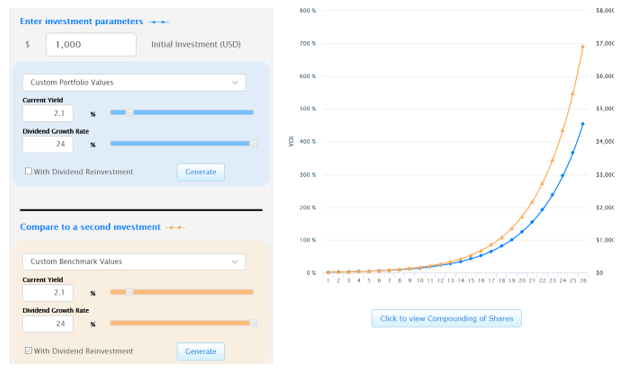 In the input section, I entered Starbucks’ 2.1% yield. I also input Starbuck’s 24% DGR, but the calculator limits DGR to 20% maximum per year in drawing the graph.

For the orange inputs, I had the dividends reinvested (note the checkmark in the box).

The blue version does not reinvest dividends.

I used a $1000 initial investment for simplicity.

As you would expect, the orange version with dividends reinvested pulls away from the blue version, especially after Year 13 or so. (See DGI Lesson 5: The Power of Reinvesting Dividends.)

How do these results compare with AT&T?

To make the comparison, we will focus on the scenario with dividends reinvested, since this is what most investors do before they retire and need the income for expenses. 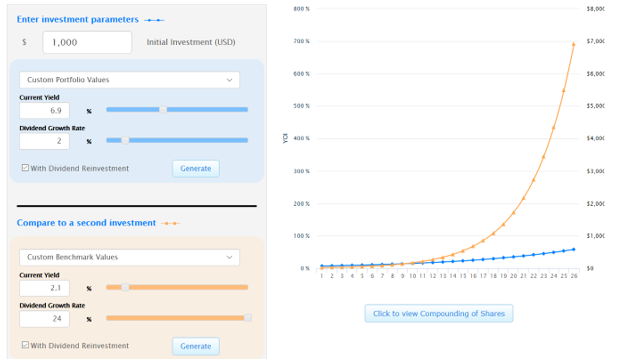 At a glance, this looks like a laughable mismatch. Starbucks wins spectacularly.

Or does it? Look closer. Through the first 9 years, AT&T sends you more dividends than Starbucks every year. Here are the dividends by year (based on the $1000 initial investment).

AT&T starts out with a sizable advantage, paying you more than 3x Starbucks in the first year alone.

While Starbucks is growing its payout much faster, AT&T’s annual payout begins much higher and is more than Starbucks’ payout in each of the first 9 years. AT&T’s higher yield gives it a giant advantage out of the starting gate in terms of total dividends delivered.

After 9 years, AT&T has paid out 1.6x Starbucks’ dividends in total, although Starbucks’ annual payment has finally caught up with AT&T’s.

The degree of AT&T’s annual advantage, of course, declines each year, because Starbucks’ dividend is growing much faster. Starbucks finally passes AT&T in Year 10. Then the annual gap widens in Starbucks’ favor each year.

After 9 years, the total dividends paid are $894 for AT&T vs. $566 for Starbucks. AT&T has paid out 58% more dividends than Starbucks through the first 9 years. Not only that, since the initial investment was $1000, AT&T has practically paid you back your entire initial outlay after 9 years. You’re basically playing with house money after that.

It will take another 6 years for Starbucks to catch up in terms of total (cumulative) dividends delivered. Here is the rest of the table illustrating that.

So Starbucks’ higher growth does eventually win out in both dividends per year (Year 10) and cumulative dividends (Year 15).

I have compared numerous pairs of stocks along these lines. Crossover points of 10-12 years for annual dividends, and 15-17 years for cumulative dividends, are typical when comparing a high-yield, slow-growth stock to a low-yield, fast-growth stock.

Those are significant chunks of an investor’s lifetime. What you term “better” may thus have a lot to do with your age when you start, and/or your need for immediate income. A retiree may view the question quite differently from a 30-year-old.

There’s another factor to think about: What is the chance that Starbucks will maintain a DGR of 20% each year for 20 years or more?

Let’s put it this way. It hasn’t been done yet. According to the excellent Tesselation website, no company with a DGR as high as 20% each year has maintained that pace for at least 10 years, let alone 20.

The highest DGR that has been maintained each year for at least 20 years is 12% per year, and only one company has done it. That company is Ross Stores (ROST), whose dividend yield is only 1.0%.

So the almost certain scenario is that Starbucks’ DGR will gradually come down. It is foolish, in my opinion, to project that Starbucks (or any company) will maintain a dividend growth rate anywhere near 20% per year for a really long term.

In fact, it is possible to construct a scenario in which Starbucks’ cumulative total dividends never passes AT&T’s, because Starbucks’ growth may slow enough that it never overcomes the early lead that AT&T gained from its higher initial yield.

Remember, when comparing dividend growth stocks, to look at both the initial yield and the historical dividend growth rate. Consider how long the faster-growing company can maintain that rate of growth. You won’t be able to pinpoint that exactly, but you can make an educated guess.
My own approach to this question is that I like to have a mixture of both kinds of stocks in my portfolio. Mixing them up is a form of diversification. See DGI Lesson 16: Diversification.

This table shows how I divide stocks into 3 categories based on yield (low, mid, and high), and then interpret their dividend growth rates in ways that are sensible for each yield range.

As you can see, I consider 2% per year to be an OK dividend growth rate for a stock with a yield of over 4%, but it would take a 9% per year DGR to be OK for a stock yielding less than 2%.

Key Takeaways from this Lesson

1. Never assume that a faster-growth dividend stock is automatically better.
2. For that matter, never assume that a high-yield stock is better either.
3. Instead, examine the interplay between yield and growth rate for both stocks.
4. A stock with a high yield at the time you buy it gets a significant head start in delivering not only dividends per year, but also cumulative dividends for many years, compared to a stock with a low initial yield.
5. “Better” is subjective. It may depend on your age, current income needs, and other factors.
6. Don’t project high DGRs infinitely into the future. Every company’s dividend growth rate eventually reverts to a level similar to its earnings growth rate.
7. Consider owning both high-yielders and fast-growers to help diversify your portfolio.

Click here for Lesson 19: How to Increase Your Investor Returns