Big News of the Month

I trimmed Microsoft (MSFT) for the second time this year, selling 7 shares for about $2000.

I replaced those shares with more shares of Merck (MRK) and Schwab’s SCHD ETF (SCHD). The net effect of the three transactions was to raise my annual dividend income by $45 (about 1%) per year.

The net outcome for dividend income from these transactions was to raise my annual income rate by $63 per year altogether.

Here’s the complete portfolio as of the opening bell on September 1: 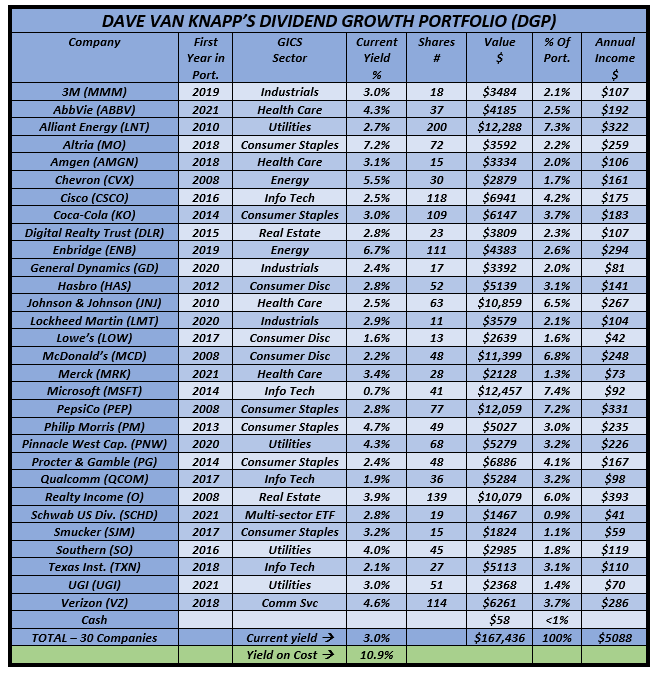 What Happened in August 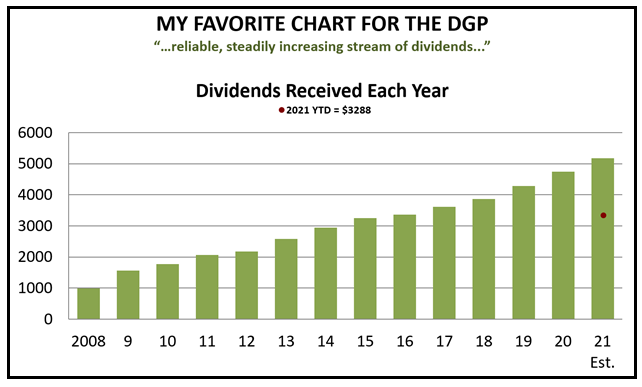 The chart above shows the DGP’s steady annual dividend growth. That relentless growth is the portfolio’s main goal.

When I sold out of AT&T in July, I deliberately accepted a temporary fallback in my annual dividend run-rate in order to side-step its upcoming dividend cut and replace it with investments that, while having lower yields, are higher in quality and have much safer dividends.

Here’s an illustration of how that decision impacts my short-term annual income run-rate: 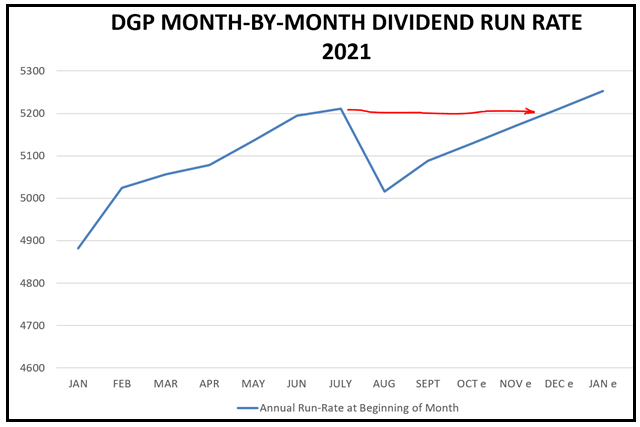 You see the run-rate rose steadily each month until July, when it dropped due to selling AT&T. Then it resumed its steady monthly rise.

Look at the red arrow that I drew across the chart. I anticipate that the portfolio will regain its former run-rate by the end of the year, and then go up from there. So in effect, selling AT&T caused about a 5-month pause in the steady upward growth of the dividend run-rate.

Despite the pause, overall dividends this year look like they will be about 9% more than in 2020. On a year-to-year basis, selling AT&T will hardly be noticeable.

Why the Portfolio’s Dividend Stream Grows Each Year

There are three reasons that the DGP’s dividend stream goes up every year.

I benefited from 30 dividend raises in 2020. So far this year, 23 increases have been announced, and I expect 8 more by the end of the year.

The ETF SCHD may also increase its annual dividend, but that won’t be known until it announces its December payout. ETFs have varying payouts, so whether an ETF has increased its payout on an annual basis is not known until it reveals its final payout of the year.

The DGP’s Growth Is Organic, Not Fueled by New Capital

All growth in the DGP – in both dividends and market value – is generated organically from within the portfolio. I have not added any new capital since I started the portfolio in 2008.

The absence of new outside money makes the DGP a great demonstration of the power of dividend growth investing by itself. No numbers are skewed by new capital coming in.

Stocks bought: Added 13 shares each of Merck and SCHD with proceeds from Microsoft trim. Added 7 more shares of Merck through dividend reinvestment.

Dividends collected: I received $379 from 10 companies as shown here.

Dividends Expected in September and Rest of 2021

This calendar from Simply Safe Dividends shows the dividend payments expected in September. They total $611 from 15 companies. E-Trade additionally shows an estimated $10 payment from SCHD coming on September 28. That payment hasn’t been officially declared yet, and its exact amount will not be known until SCHD declares it. 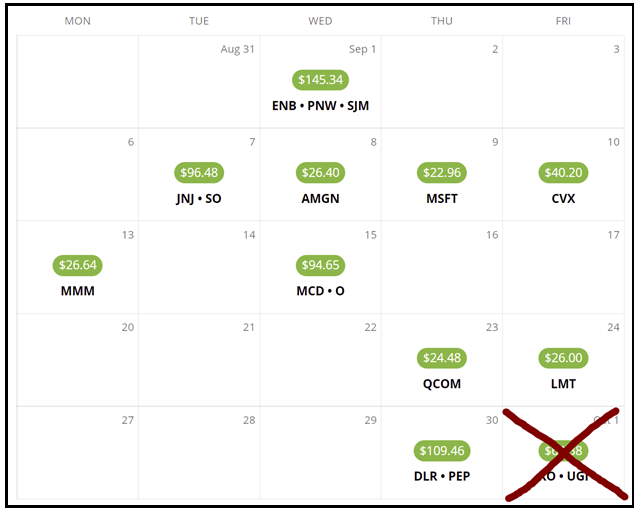 September is the 3rd month of the calendar quarter, which is the heaviest month for payouts in this portfolio. More than half the holdings in the DGP will pay a dividend in September.

The varying amounts each month are a minor outcome of the particular payment schedules for the stocks that I own. The variations have no broader significance, and I don’t care that the monthly totals differ. I have never selected (or turned away from) a stock based on its payment schedule.

The next display, from E-Trade, shows the portfolio’s annual dividend run-rate for the next 12 months, which stands at $5088/year. You can see the repetitive quarterly pattern of month-to-month dividend payouts in the chart.

One of the basic portfolio-construction considerations in dividend growth investing is to hold companies that raise their dividends each year.

In the DGP, 23 companies have announced increases for 2021 so far.

One dividend is frozen: Hasbro. I am not currently contemplating selling Hasbro on the basis of its frozen dividend, but I might do so in the future. The stock has gained 21% in price this year. It yields 2.8%, just a little less than the portfolio itself, so at some point I might want to sell or trim it and turn those capital gains into more income by moving some money elsewhere.

That said, I do expect Hasbro to announce a dividend increase in the next few quarters, because its business seems to have recovered from pandemic effects. Prior to its freeze, Hasbro had a 17-year dividend growth streak.

Over the past three years, the number of DGP’s increases has been 28, 29, and 30, with no cuts and a small number of freezes.

In the Tracker below, new information recorded in August is highlighted in yellow. Hasbro’s frozen dividend is shaded orange. 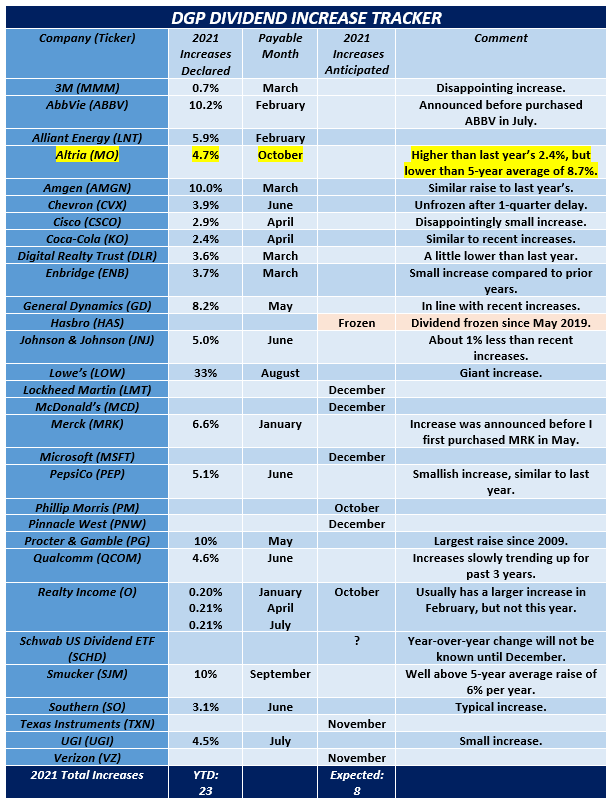 I calculate the DGP’s yield in two ways.

Here is the formula for current yield:

That is unchanged from last month.

In its 13-year history, the DGP’s current yield has ranged between 3.0% and 4.2%. Over the long haul, those variations are not significant. They primarily reflect prices going up and down.

The macro trend of increasing interest rates has received a lot of news coverage over the past few months, but in reality, such rates haven’t actually risen much.

Yield on cost (YOC) is the portfolio’s yield based on the original money invested when I started the portfolio in 2008. Here’s the formula:

This is up 0.2% since last month, which is the result of trimming/replacing Microsoft, reinvesting dividends, and the single dividend increase announced in August. YOC goes up in step with the dollars in the dividend stream, because the denominator in the formula never changes.

YOC is a “scoreboard” metric, meaning that it shows how the game has gone up until now. In contrast, current yield shows where you would start out if you were buying the portfolio right now.

As a scoreboard metric, YOC reflects the impact of every decision I have made – to reinvest, what to buy, when to trim, etc. – since I started the portfolio in 2008.

What 10.9% YOC means is that my portfolio is now sending me – in cash each year – dividends at the rate of  10.9% of my original investment.

That kind of income-generating power was the inspiration for the portfolio in 2008.

I’m hoping that these real-world results are inspirational for younger investors who can think long-term.

Earlier, I noted that a growing dividend stream results from three things: dividend increases; reinvesting dividends; and changes that I make to the portfolio.

Note that the second two – reinvesting and adjusting the portfolio – are things that are in my control as the investor. They are actions that I choose to take. That makes them part of portfolio management.

Let’s talk about reinvesting dividends first. As described in DGI Lesson 10, dividends can be reinvested either by dripping them or by letting them accumulate in cash for larger “bulk” purchases.

I use the second method. I collect the dividends in cash, then reinvest them monthly.  So far this year, here are my reinvestments: 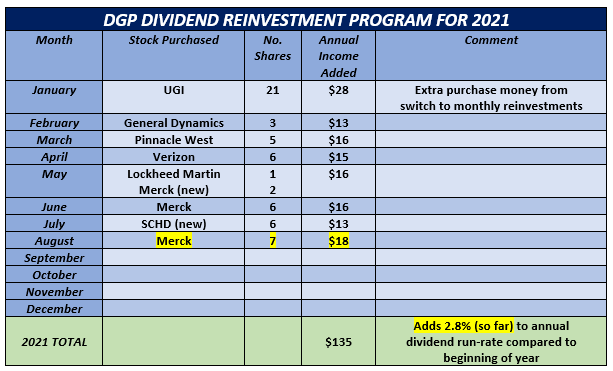 The reinvestment in August – increasing the size of my Merck position – is highlighted. Overall, I’ve increased my dividend-run-rate by 2.8% so far this year via dividend reinvestments alone.

The second part of portfolio management includes decisions like selling or trimming a holding and picking what to buy with the money received. Here is what I have done (so far) in 2021.

This year has been more active than usual. In some years, I make no changes at all. But in 2021, I have trimmed Microsoft twice, Johnson & Johnson once, and sold out of AT&T. The overall combined impact of these moves has reduced my annual dividend income by $62, but also made it safer going forward.

For comparison, if the DGP’s original money had been invested in the S&P 500 index via the ETF called SPY, with dividends reinvested, it would have increased +320% to a total value of $196,488. (Source) The SPY investment would be yielding less than half of the DGP’s current yield (1.3% vs. 3.0%).

All of the DGP’s deficit in total returns compared to SPY has taken place in the past 16 months. At the end of April, 2020, my portfolio’s lifetime total return was more than SPY’s.

But since the end of the pandemic crash in February, 2020, tech and other fast-growth stocks have been on a price rampage that has caused a massive increase in the value of the S&P 500. My portfolio, which emphasizes dividends and a value tilt, has not kept up with that price explosion.

Background: What is the Dividend Growth Portfolio?

Remember, the DGP is not presented as best or a model. Rather, its purpose is to provide a live demonstration of what you can accomplish with dividend growth investing, and what it is like to run a real stock portfolio. I show what I do and explain why I do it.

For a list of all of my articles about my portfolio, see below.