Disneyland markets itself as The Happiest Place on Earth, but I’ll be perfectly happy if I never go there again.

That goes for Disney World, too – I’ll be fine without another visit to the Magic Kingdom, ride on Donald’s Dino Boat Bash, or chance to take part in the Frozen Sing-Along Celebration.

Yes, I’m even willing to sacrifice another Breakfast with Goofy! 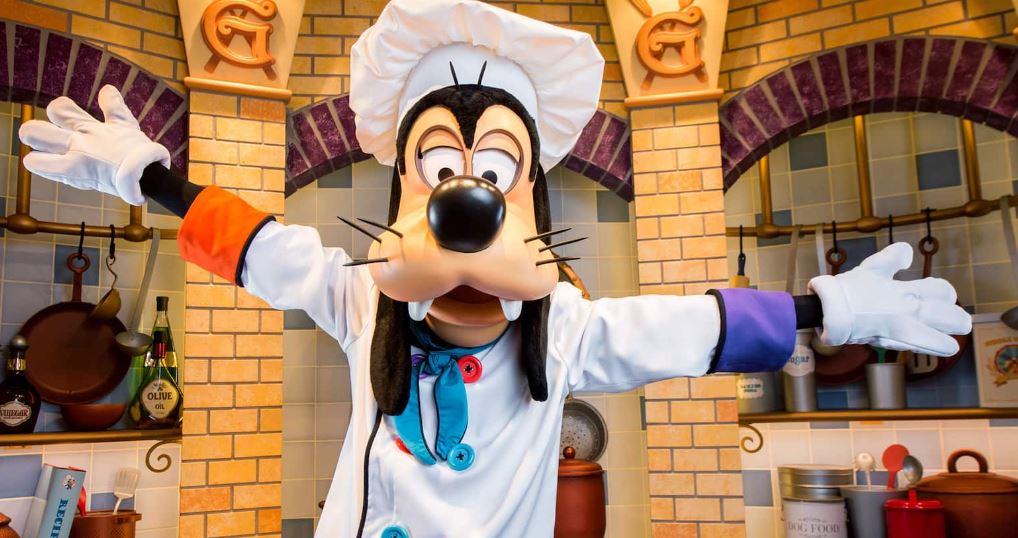 I am NOT saying others should bypass any of that fun. In fact, as a shareholder of Walt Disney Company (DIS) stock, I encourage folks to experience all the happiness they can afford. And maybe even some they can’t quite afford — hey, I’m a shareholder in Visa (V) and Mastercard (MA), too!

I’ll wish my wife well if she wants to do the whole Disney deal with the grandkids. But Me? Been there, done that (a few too many times already). I’ll be playing golf somewhere.

Although I’m willing to skip another serving of magic, I obviously believe Disney is a wonderful business and I value the company as an investment.

Indeed, I think its stock price has been beaten too far down recently, and on Sept. 30, I bought a share of DIS for each of my four grandkids as part of my Growth & Income Portfolio. 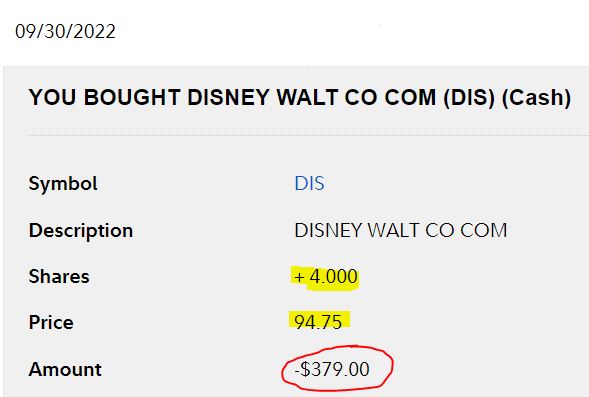 I’m building the portfolio to eventually help with college costs for Jack, Logan, Owen and Piper. But I also hope to use the GIP to teach them a little about saving and investing, and I’m thinking that Disney will pique their interest.

In addition to the eponymous theme parks both in the United States and in foreign lands, there’s a popular cruise line, ESPN, the fast-growing Disney+ streaming service, majority ownership of Hulu, and of course, an incredible catalogue of entertainment that dates back nearly 100 years. 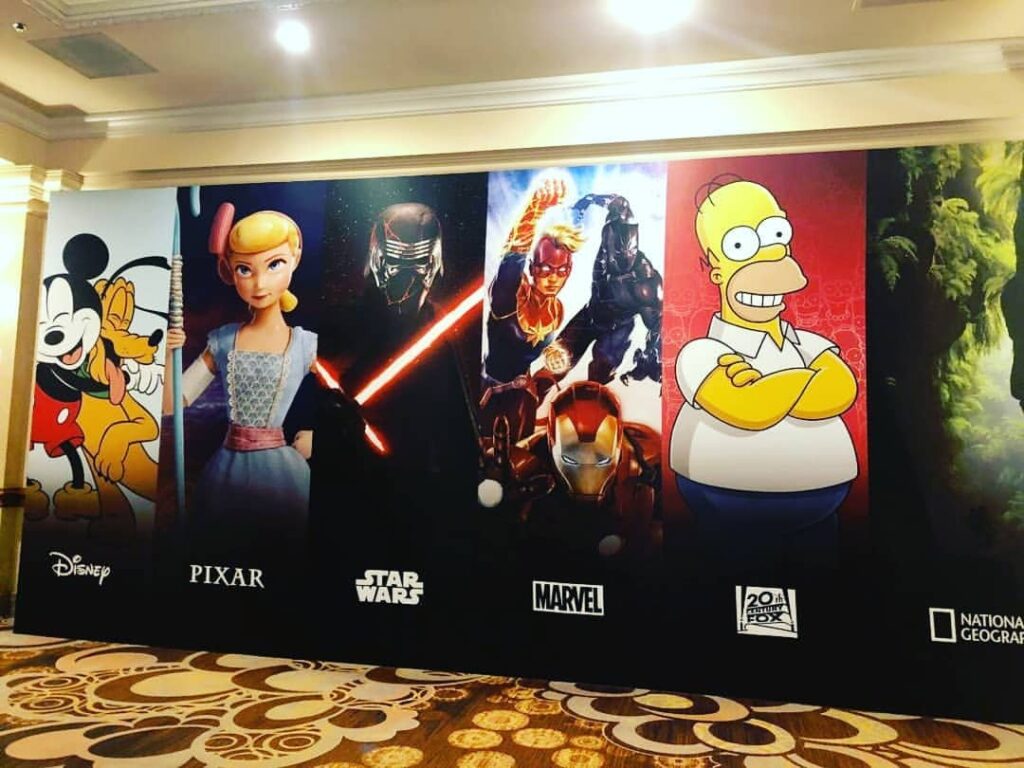 Shouldn’t every kid own a piece of that?

The Growth & Income Portfolio originally was started back in June 2020 on behalf of now 3-year-old twins Logan and Jack. (It was originally called the Grand-Twins College Fund before I changed the name to more accurately reflect its strategy, and to appeal to those who might be investing for goals other than college.) 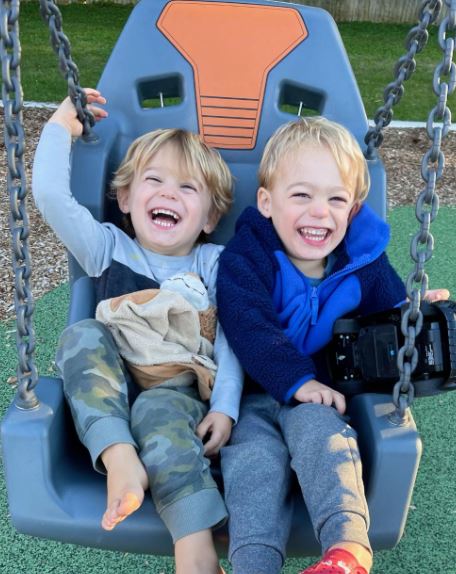 About a year ago, I also started investing for their cousins, Owen (now almost 2) and Piper (6 months). In exciting family news, Owen, Piper and their parents (our daughter Katie and her husband Ben) just moved from Seattle to Charlotte to be near me and my wife Roberta. 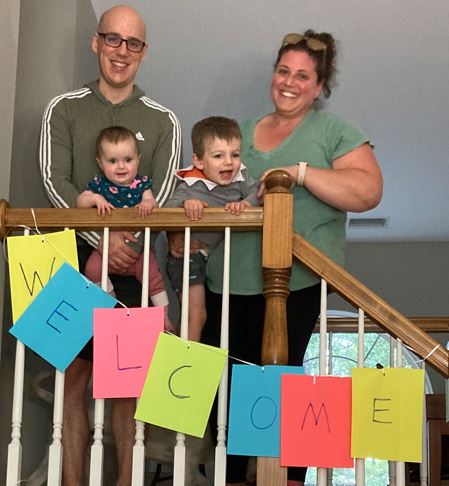 I’ve been investing about $100 per month for each set of grandkids. Having skipped August, I doubled up in September with the Disney buys.

Also on Sept. 30, I deployed some of the birthday money that Jack and Logan’s other grandparents, Linda and Mickey, contributed on their behalf — adding about $25 worth of stock to each of eight existing positions: 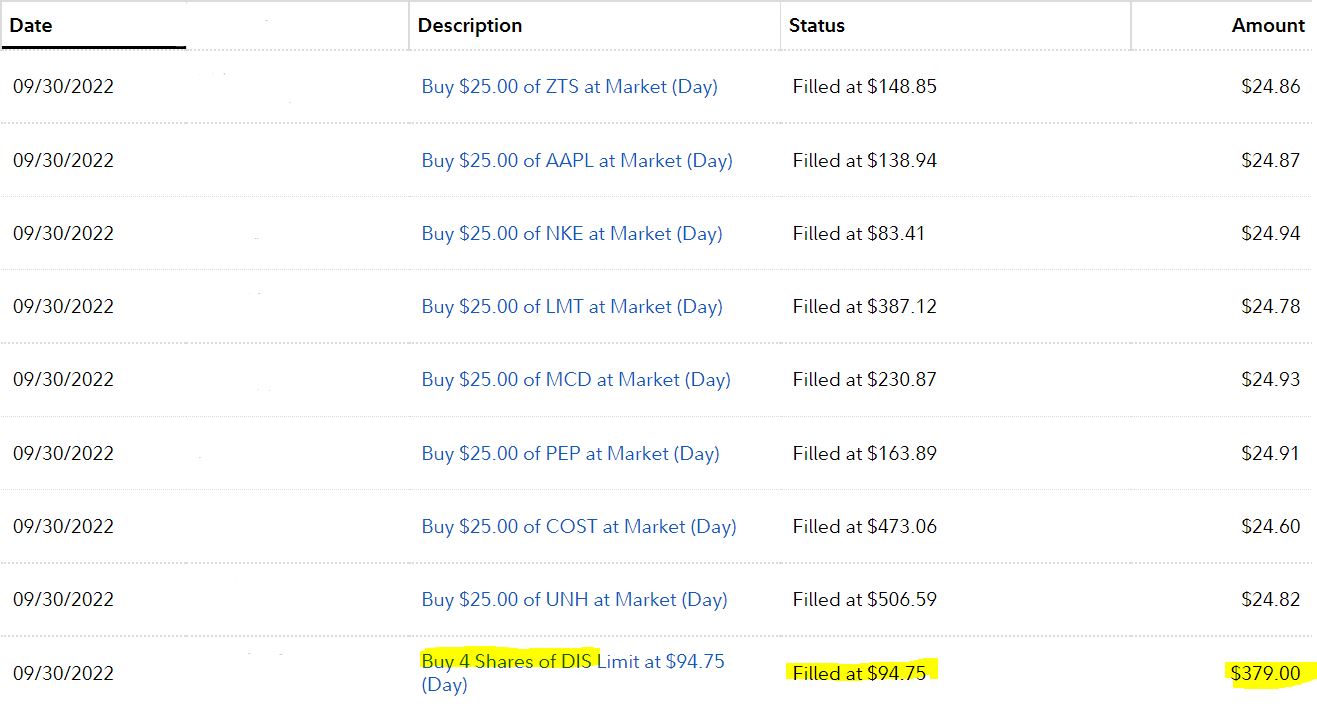 At the end of September, the Jack & Logan part of the portfolio was worth just under $5,000. The addition of Disney brought the number of positions up to 19. 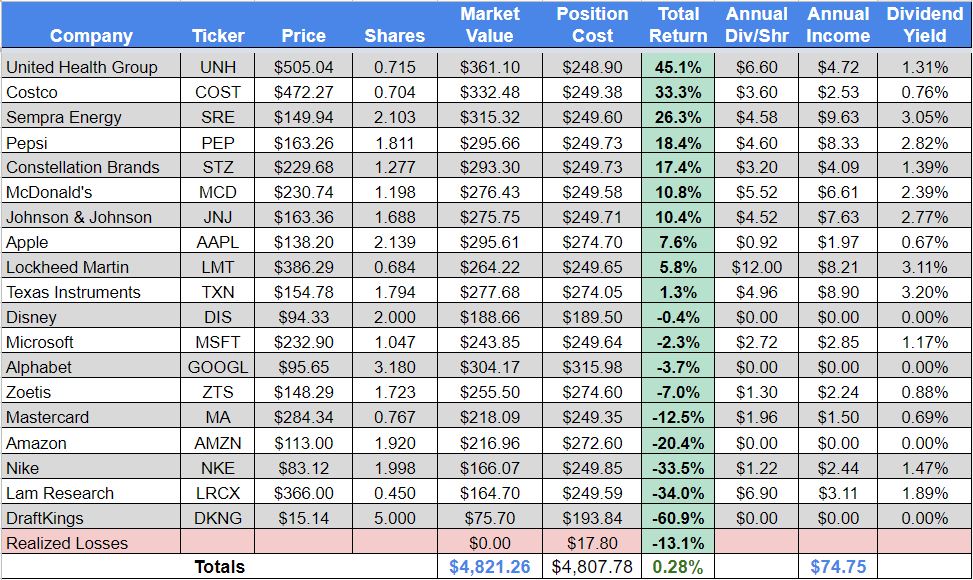 Due to high inflation, rising interest rates and war in Russia, the first three-quarters of 2022 was rough for Mr. Market, with the S&P 500 Index falling almost 25%. You can see in the above table that the Growth & Income Portfolio barely held onto the gains it had amassed over the previous year and a half.

Meanwhile, the Owen & Piper portion of the portfolio was deep into negative territory at the end of September, as the two Canadian banks that make up the majority of it lost ground.

Things can change fast, however. The first two market sessions of October have seen the S&P 500 Index jump 5.7%, producing gains for every GIP holding. That includes Disney, which is up 7.5% … just as I knew would happen before I bought it — ha!

But I won’t get caught up in this portfolio’s day-to-day or even month-to-month performance. This is truly a long-term endeavor, as I don’t expect to take the first dollar out of the GIP until the late 2030s.

Given that the stock market has never had a negative 20-year stretch, I like the chances of this portfolio having assets worth tens of thousands of dollars when Owen, Piper, Jack and Logan are in college.

Catching Up With Disney

The last five years, Disney’s ride as a stock has been more wild than the Space Mountain rollercoaster. 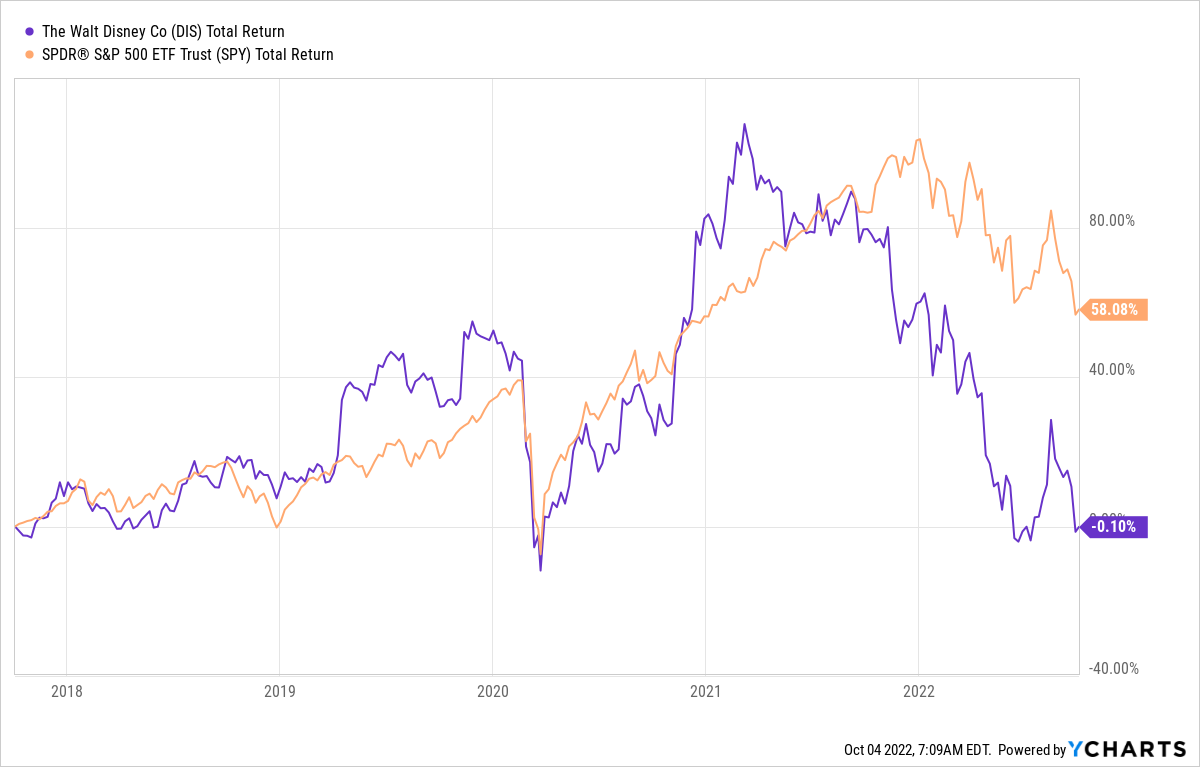 DIS was outperforming the market nicely until the arrival of the COVID-19 pandemic — which shut down its theme parks and cruises, resulting in significant losses in earnings and revenue.

Once the economy started re-opening, Disney recovered fairly quickly, and the price zoomed to new highs … until it actually became overvalued. That was unsustainable once inflation reared its ugly head, and the price plummeted again. At the end of September, the stock was basically back to where it had been five years earlier — the rollercoaster had returned to the starting gate.

After cratering, earnings are moving back up and sales are growing again. The company’s major acquisitions sent the debt level skyward, but Disney is gradually getting that under control, as well. (The following three graphs are from Simply Safe Dividends.) 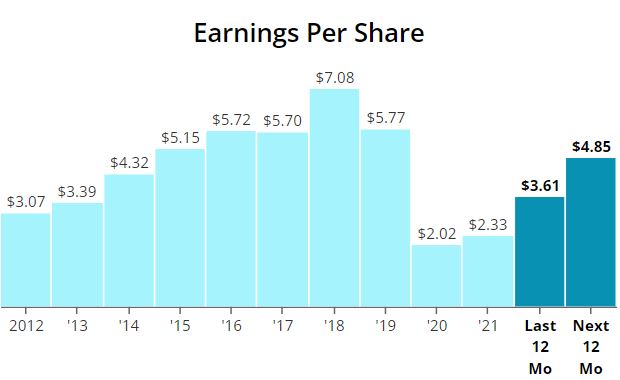 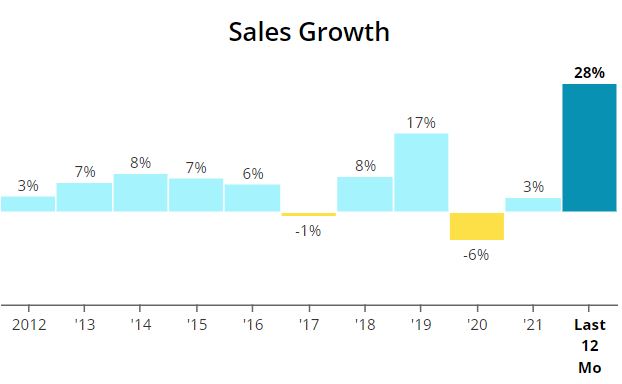 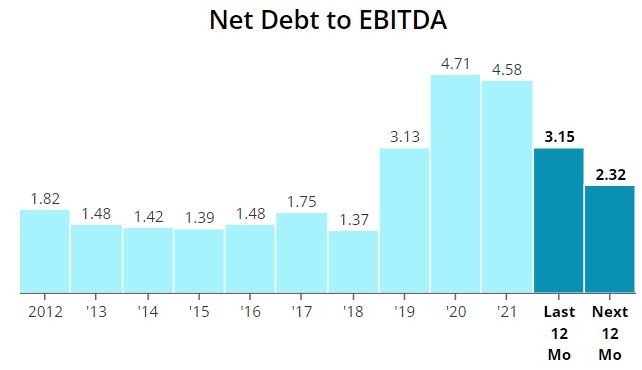 Disney is a strong business that has overcome major adversity and is moving in the right direction again — it almost sounds like the plot of any number of the company’s films.

Because investors always should be forward-looking, the following FAST Graphs image shows one of the main reasons I find DIS attractive now. After the pandemic plunge of 2020, earnings are expected to soar like Luke Skywalker’s X-Wing.

That forecast no doubt has contributed to the bullish views of analysts — 23 of the 30 monitored by Refinitiv consider DIS to be either a Strong Buy or Buy.

The mean of those analysts’ price targets for the next 12 months is $144, suggesting a nearly 50% upside.

Disney was one of nine high-conviction stocks Bank of America picked for this year’s fourth quarter, with its analysts saying:

We believe DIS remains well positioned to navigate any potential macro uncertainty driven by: (1) continued robust theme park demand with several levers for future growth, (2) price increases for Disney+/Hulu, (3) the roll-out of Disney+’s ad-supported tier on December 8th, and (4) the release of Black Panther 2 in November and Avatar 2 in December.

Value Line includes Disney in its model portfolio of “Stocks with Long-Term Price Growth Potential,” saying Disney’s 18-month upside is 58% and its 3-5 year potential is for more than a 100% gain. VL also gives DIS solid grades for financial strength (A) and relative safety (2).

At the end of September, Morningstar said DIS was trading at a 45% discount to fair value. 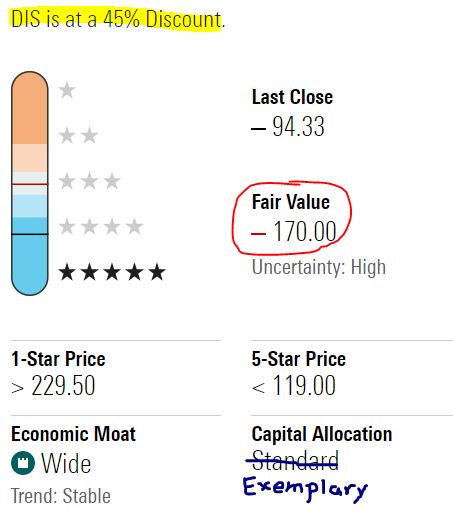 Morningstar also recently upgraded Disney’s capital allocation from Standard to Exemplary, citing “our assessments of sound balance sheet, exceptional investments, and mixed shareholder distributions.” Disney has competitive economic advantages, which is why Morningstar says the company has a “Wide Moat.”

And Disney gets an investment grade BBB+ credit rating from Standard & Poor’s — which recently upgraded the company’s outlook to “positive” (from stable), reflecting “our expectation for continued leverage improvement over the next two years, supported by the strong pent-up demand for its domestic theme parks and smaller losses from its direct-to-consumer streaming services.”

Disney suspended its dividend during the pandemic and has not reinstated it, making DIS one of just four non-dividend-paying stocks in the GIP.

Even though the company had paid a dividend for years, its yield was low and I regarded the dividend as little more than a bonus back when I had a large Disney stake in my personal portfolio. (I took profits, liquidating the position fairly early in the pandemic.)

In other words, I didn’t buy DIS for its dividend years ago, and it doesn’t bother me that Disney is divvy-less now.

The Growth & Income Portfolio emphasizes growth, but it does produce an expanding income stream. Here were the dividends received by GIP components in the third quarter; all payouts were reinvested to buy fractional shares of the stocks that generated them: 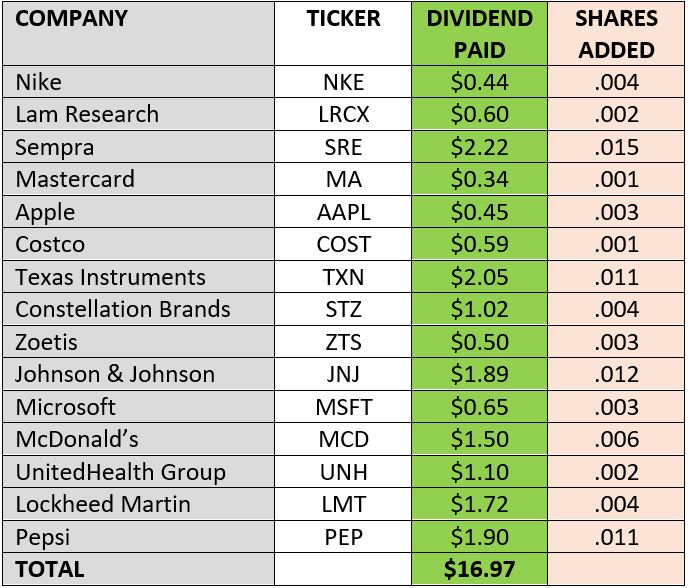 Although $16.97 might not seem like much, that’s 57% more in dividends than the portfolio produced in the July-September quarter last year. A combination of new buys, dividend reinvestments and distribution increases contributed to the rapid rise in income.

Years from now, when I’m ready to start helping with college costs, the income stream will be material and appreciated.

Four companies in the GIP raised their dividends during the quarter: Lam, Texas Instruments, Microsoft and Lockheed Martin.

McDonald’s could announce its next dividend hike anytime now. Other GIP holdings expected to declare increases during the fourth quarter include Nike, Mastercard and Zoetis.

Back in April 2018, Disney was one of our early buys for the Income Builder Portfolio, the other public project I manage for this site. We then got more in March 2019.

We sold it in May 2020 because I was concerned that the pandemic might inflict long-term damage to the company. The stocks we bought with the proceeds have vastly outperformed DIS since then. 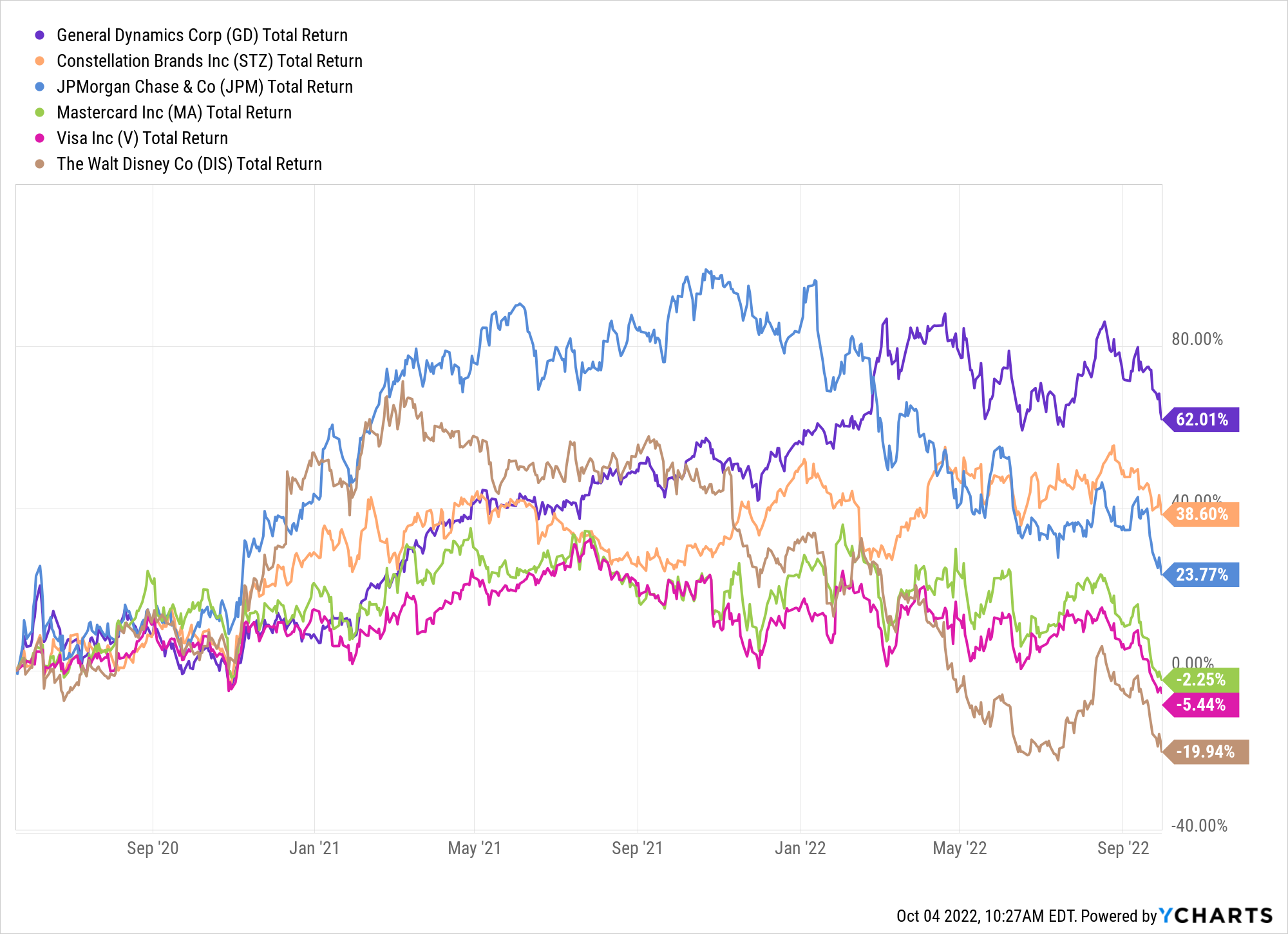 Nevertheless, Disney’s business has recovered more quickly than I expected. And at around $100/share, the stock looks like a pretty compelling value now. If, like me, you’re planning to avoid theme-park crowds for the foreseeable future — or maybe forever! — there are worse places to put the money you’ll be saving than into shares of DIS.

If the company does as well over the next 15-20 years as I think it will, I’ll have The Happiest Grandkids on Earth. (And they’re already pretty darn happy!)

NOTE: I will continue to invest $100 per month for each set of grandkids, but this will be my last article about the Growth & Income Portfolio for a while. I will keep updating the portfolio’s home page, which also includes links to every GIP-related article I’ve written — HERE. Be sure to bookmark it.

I’m still writing regularly about the Income Builder Portfolio, in which we invest $2,000 per month primarily using the Dividend Growth Investing strategy. The home page, which includes every IBP article I’ve written over the last 5 years, is HERE. Check out my piece about our most recent buy, Eastman Chemical (EMN), HERE.